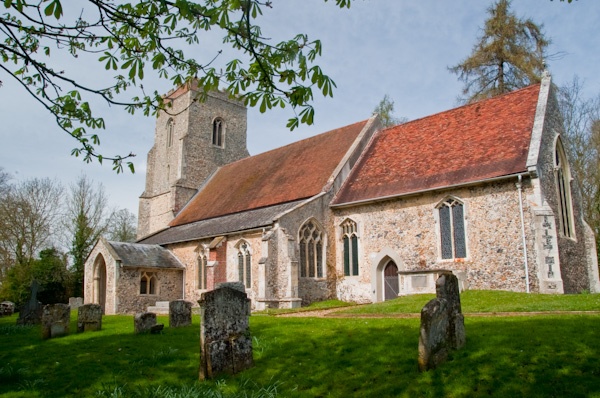 As you turn off the A1141 towards the little village of Brent Eleigh you go down a dip in the road into a hollow, between tall overhanging trees. It feels as if you are going back in time, and in a way, you are, back to the 13th century, when the church of St Mary was built on its steep-sided hill beside Brent Eleigh Hall.

The church is a late 13th or early 14th-century building of flint and stone and has blessedly avoided the excesses of Victorian restoration. You enter by the south door, which dates to the 14th century.

Within you will find 15th-century benches leading to rows of Jacobean box pews with some 19th-century additions. On one side is the manorial pew, enclosed by the high, panelled walls of a parclose screen.

This has been called the oldest screen in Suffolk, which if true, would mean it was probably contemporary with the building of the church. There is an early 14th-century font topped with a Jacobean cover and a nicely carved Jacobean pulpit. 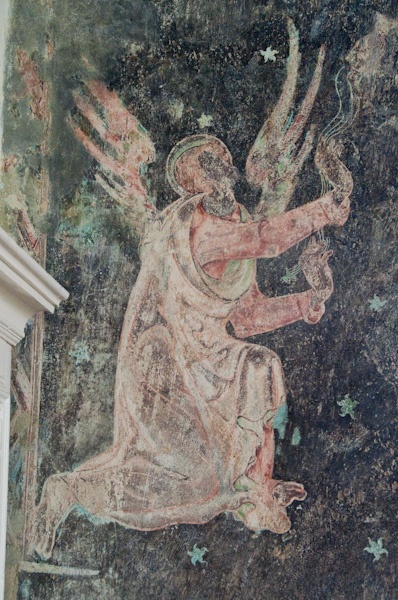 Wall painting of a censing angel

In the chancel is an attractive monument to Edward Colman (d. 1739), crafted by Thomas Dunn, who is best known for his work with architect Nicholas Hawksmoor. This is a stylised classical affair, showing a semi-recumbent Colman draped in bedclothes, surmounted by a cherubic angel bearing a crown. The memorial is set behind iron railings, which seems rather odd for something of this late period.

Though all these interior features are interesting, especially the Colman monument, they pale by comparison to the real treasure of St Mary's, a series of early medieval wall paintings which can be found on the east wall, beside and beneath the large east window.

These were discovered in 1960 under a coat of whitewash and were carefully restored by Eve Barker. Together they make up one of the finest collections of wall paintings in England. Let's take a look at the trio of paintings, starting from the left (north) and working our way to the right (south).

It seems likely that a statue of the Virgin Mary, to whom the church is dedicated, stood here on the left of the high altar. The statue is gone, leaving only a partial outline, flanked by a pair of censing angels. They are set against a background that was originally a bright turquoise colour, with applique gilt stars.

From the style of the angels, we can guess that they were painted in the second half of the 13th century, and are similar to conventions established at Westminster. In other words, they must have been painted by an artist familiar with the Westminster work, not a local yokel.

Beneath the east window, and directly behind the high altar, is a horizontal strip, like a cartoon panel, depicting the Crucifixion. This probably dates to the early 14th century and is of a very high standard. As is traditional, the figure of Christ on the cross is flanked by figures of Mary and St John.

The first thing you notice about the figures is that they are not stiff, like the 'cardboard cutout' figures you sometimes see in late medieval art, but sinuous, full of life and movement. The robes of the figures fall in graceful lines. The figures stand out beautifully against a light green background. This Crucifixion scene is historically important as the only known example of a wall painted altarpiece still in situ in all of England.

The Harrowing of Hell

To the south side of the altar is a much-worn scene depicting the Harrowing of Hell. Despite the fact that the painting has suffered the effects of age, it has been called the most important of the Brent Eleigh paintings. It is contemporary with the Censing Angels, dating to the latter half of the 13th century. You can make out a figure of Christ with a kneeling Adam to the left.

A very intriguing smaller figure bearing a tonsure kneels below and to the right, looking up at Christ. This 'priest' is likely the donor or patron responsible for the painting. The donor figure is accompanied by a Lombardic inscription '+RICA'.

The three wall paintings together probably span the years 1270-1330 and are a wonderful example of early medieval work. 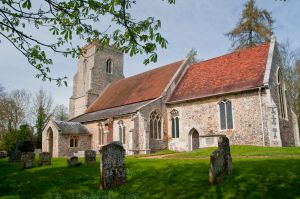