HERITAGE HIGHLIGHTS:   One of the best preserved timber-framed buildings in England 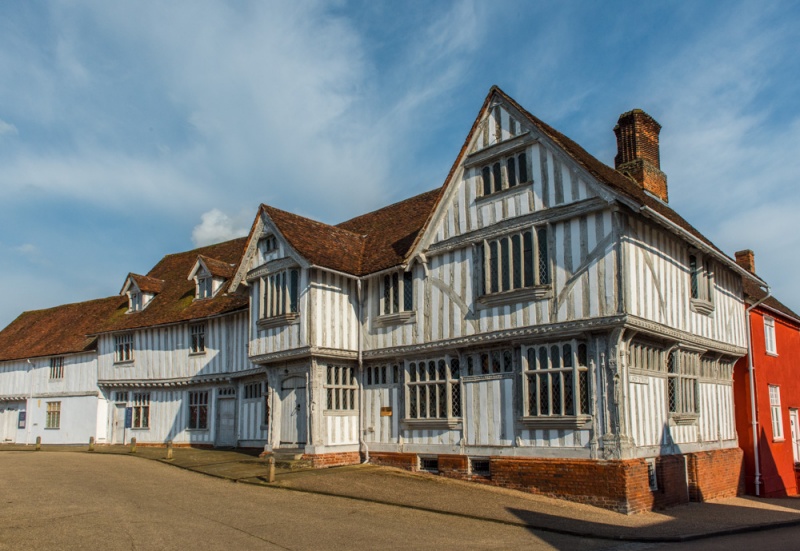 The Guildhall of Corpus Christi is a superb Tudor building at the centre of the historic village of Lavenham. The timber-framed guildhall houses a museum of local history, with displays covering Lavenham's rich history as a centre of the cloth-making industry.

The Guildhall has been called one of the finest timber-framed buildings in Britain. It was built around 1530 by the Guild of Corpus Christi, a religious organisation of local merchants. It was used by the Guild as a meeting place until the organisation was dissolved in 1560.

Corpus Christi was one of five trade guilds in Lavenham, but it must have been the richest and most important, judging from the size of the guildhall and its prime location fronting onto the market place.

Though it was composed of wealthy merchants, the main focus of the Corpus Christi guild was on religion and charity. Bequests to the guild not only went to help the less fortunate, however, they were also spent on paying priests to say Mass for the souls of the benefactors.

The Guildhall - and the guild itself - were unfortunate victims of an economic downturn. In the late medieval period (before the Guildhall was built), Lavenham was extraordinarily wealthy as a result of the wool trade. Lavenham blue woollen cloth was in heavy demand, and the local wool merchants piled up enormous wealth.

It made sense that the guild would invest in a new hall as a meeting place. But as luck would have it, the cloth trade began to collapse in the early 16th century, just before the Guildhall was erected. The wealthy merchants who built it could not afford to maintain it, or their own impressive houses throughout the village. The Guild survived for just three decades after erecting their grand new meeting place. 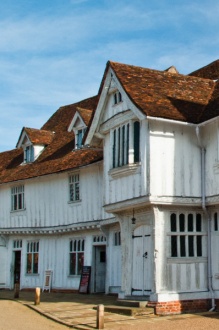 In 1547 an Act of Parliament abolished religious guilds like Corpus Christi, and their property was seized by the crown.

The building was home to the Lavenham council during the 17th century before being turned into a prison around 1689. Prison reformer John Howard visited in 1784 and described it as being in a poor state of repair. Just three years later the prison closed, and the building was later used as a wool store, and then as a local workhouse.

In 1887 the Guildhall was purchased by Sir William Quilter, who restored it. It was restored again in 1911, and it was used as a temporary home for evacuees during WWII, as well as a restaurant and a nursery. Following the war, Quilter's son, another Sir William, gave it to the village, then in 1951 it was passed to the National Trust.

Behind the Guidhall is a small walled garden featuring plants that have been used for dying cloth since at least the medieval period. Children will enjoy dressing up in period costumes.

I came to Lavenham on a gorgeous summer afternoon, so perhaps my take on the Guildhall is coloured with the happy glow of sunshine, but I found it a wonderful place to visit. You really do get a sense of how the building was designed and built, and how it was used over time. There are displays on weaving, and local history, and from the building's period as a local gaol.

Every floor seemed to dip this way and that, and every timber seemed bent with age, but the building is an absolute delight, a wonderful Tudor survivor. Look for the lovely carved decoration on the building's exterior.

Lavenham itself is a beautifully preserved medieval village. Indeed, perhaps no village in Suffolk retains so much of its medieval heritage. 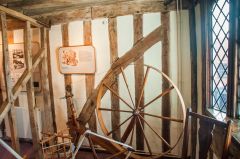 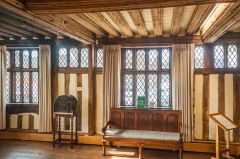 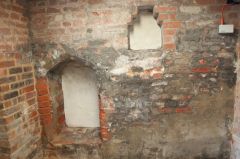 More self catering near Lavenham Guildhall >>