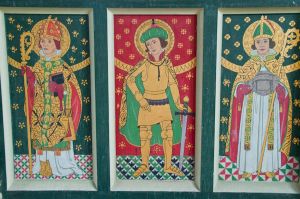 Not many people make their way to Kettlebaston; this sleepy hamlet seems happy to slumber on in peaceful rural isolation, yet it is only a few miles from the popular tourist town of Lavenham. The church of St Mary stands just off the main road through Kettlebaston. It is an unobtrusive building of flint and stone, begun in the Norman period but mostly a 14th-century building.

The path takes you by the angle buttress supporting the south-east wall of the chancel, and there you will see a niche set into the thickness of the buttress, where a painting of the Coronation of the Queen of Heaven is displayed.

This is a copy of an alabaster original discovered during renovations in the mid-Victorian period. The original is now in the British Museum in London. Recesses such as these were not uncommon in the medieval period, but are seldom seen in use today.

You enter through a Norman doorway with nicely moulded shafts and capitals. Inside the church is a square Norman font and traces of 13th-century wall painting. In the north wall is an ogee-arched tomb recess.

There is a very brightly painted screen, very definitely not medieval! In fact, the richly coloured figures are 20th century, an indication of the extreme Anglo-Catholic sympathies of the long-time vicar of Kettlebaston, Father Harold Butler.

Even the brightly coloured rood screen pales by comparison with the Sacred Heart altar, an exquisitely painted and gilded affair that would seem at home in an ornate Catholic oratory.

In fact, that is the impression one gets from visiting Kettlebaston; it is quite unlike any other simple country church I have had the pleasure to explore; it may not be to everyone's taste or sensibilities, but it is certainly memorable.