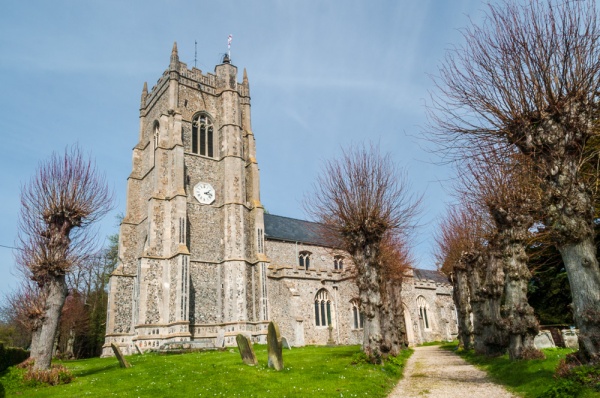 There was a Saxon church serving the Suffolk village of Monks Eleigh, but the present parish church dates to around 1350. In the following century, the church was enlarged, the striking west tower built, and clerestory windows added. The 15th-century additions came at a time when the Suffolk wool trade was at its height, and local wool merchants poured their considerable wealth into the church.

The 15th-century church remained almost untouched for 400 years, but by the middle of the 19th century the chancel had decayed to the point where it was declared unsafe and had to be rebuilt on the medieval foundations.

The result of this and later Victorian refurbishment is that the interior of St Peter's looks like a 19th-century church, belying the building's great age. 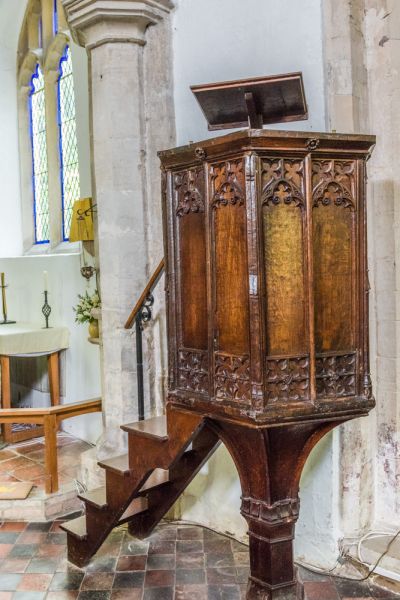 The west tower exterior boasts an ornate west doorway with beautiful late medieval carving, and superb flint flushwork - patterns made by polished black flint. Look for the small cage that houses the hour bell. It used to hang in a 17th-century spire, but the spire was taken down in 1835, leaving the bell to hang out on the open air. Within the belfry is a ring of 6 bells, the oldest cast around 1330.

The south door is 15th century, and though it is very worn you can see its original detailed carving. Just inside the door is a 1636 pillar alms-box, and nearby is the parish bier, made in the late 16th century.

The 13th-century font is made of Barnack stone, with the square bowl set upon five pillars. The wooden cover incorporates fragments of medieval carving. 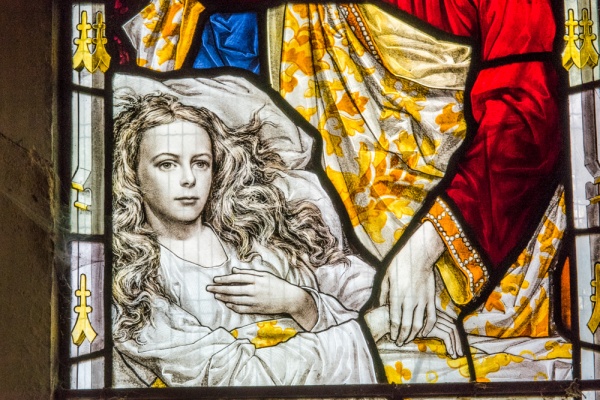 Victorian stained glass in the chancel

At the east end of the nave is one of the oldest pulpits in Suffolk, dating to the mid-15th century. Though it is plainly carved, it is one of the few surviving medieval pulpits in the county.

The nave roof is 14th century, and leads to the chancel arch, over which hangs the royal coat of arms of Queen Anne, dating to the first decade of the 18th century. On the ceiling are remains of a canopy of honour which would have stood above the rood.

The chancel is almost as large as the nave. One of the best features is a series of Victorian stained glass windows in the south wall, depicting scenes from the life of St Peter. Each window is dedicated to a particular donor, whose likeness you will see amid the Biblical scenes. The quality of the glasswork is exceptional, and the likenesses of the patrons are almost photographic in quality. 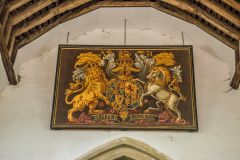 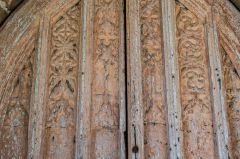 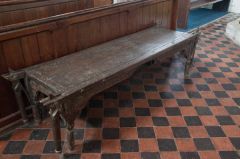 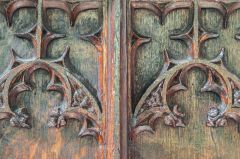