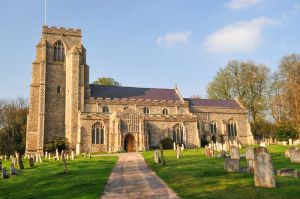 A church is recorded at Hitcham at the time of the Domesday Book, but the current All Saints is a mainly 14th/15th-century building. Hitcham has not always been a prosperous place to live; indeed, in the early Victorian period it was described a being one of the poorest parishes in Suffolk, but the church is a lovely building of flint and stone.

The nave and aisles are 14th century, but the chancel was rebuilt in 1878. The 15th century west tower is extremely attractive, with angle buttresses showing distinctive chequer work finishing, and a stair turret. The most interesting feature of the exterior, however, is the lovely south porch, a symphony in flint with stone dressing.

The nave roof is a double-hammerbeam design, with beautifully carved shields at the lower ends of the beams. Look for the grimacing Green Man amid the carved roof ornamentation.

The benches are mainly 15th century and have some very nice poppyhead ends. In the north aisle is an attractive wall tablet in classical style to Sir George Waldegrave (d. 1636), but the most appealing feature of the interior is the painted rood screen base.

What makes the Hitcham screen unusual is that the painted panels depict, not saints, as you might expect, but figures of angels holding the instruments of Christ's Passion.

The angel's faces have suffered the usual Reformation indignity of having their features scraped away, but there is enough left to appreciate. The style of the painting is fascinating; the angels are depicted with green feathers and look curiously like oversized poultry wearing crowns.

More self catering near Hitcham, All Saints Church >>

More bed and breakfasts near Hitcham, All Saints Church >>