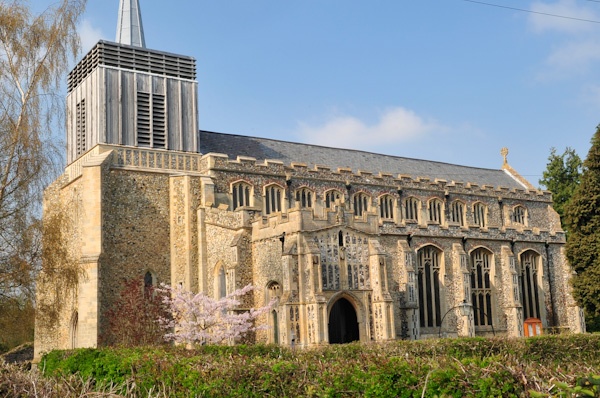 The church of St Mary Magdalene stands high on a hill, overlooking the village itself a good half-mile away on the valley bottom. Why is St Mary's so far from the rest of Bildeston? The usual (and usually erroneous) answer in cases like this is to blame a distant village on the Black Death of 1348-9. But the more practical and less romantic answer is simply a gradual move to be near the site of a market, which a 13th-century lord of the manor established near the crossroads in the valley below.

In the field opposite the church are bumps and hollows which show the site of the original village and the long-vanished moated manor. A church was noted at Bildeston in the Domesday Book, and a document from the reign of Richard I states that the founder was one Lady Helewise de Gwerres, sister of the lord of the manor.

Fragments of the Norman church have been found in the lower walls of the tower. However, the current building is largely 14th-century work, from the age when Decorated Gothic flourished. And flourish it does, here at Bildeston, in the architecture of the nave, chancel, and base of the tower.

Ah, the tower. This is a rather truncated affair of wood, topped with a slender spire. The tower and spire are modern, erected after the old tower collapsed without warning in 1975. Others might find the unusual tower unappealing, but I found it rather poignant, a reminder, perhaps, that we tend to take these beautiful old churches and their towers for granted. Musings aside, the most interesting exterior feature is the porch, built in the 15th century and a triumph of flint flushwork architecture

The aisles and porch were added in the 15th century, when the nave and chancel were raised and a clerestory and new east window in Perpendicular style inserted.

Look up, high on the west wall of the nave, and you will see a small sanctus bell window. It might seem odd to find a window facing inwards from the tower towards the nave, but there's a good reason for the oddity. 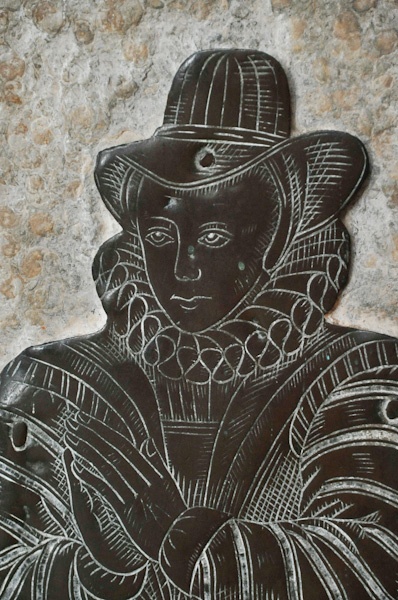 In the late medieval period, it became quite common to ring a sanctus bell when the host was raised during the celebration of mass. But how was the bell-ringer to know when to ring the bell? Easy; cut a window in the wall of the tower, facing towards the high altar. Then, when the priest raised the host, the bell-ringer would swing into action.

The font is 15th century, in Perpendicular style, with some very nice carvings, some of which have been unfortunately defaced at the Reformation.

Perhaps the most interesting historic feature is a monumental brass set on the north wall. This is a memorial to William Wade (d. 1599). The brass figure of Wade was stolen at some point in the past, but the figures of his wife, Alice, and their children, are still intact, and the detail of their late Elizabethan dress is very revealing of the fashion at that time.

In the chancel are 10 seats with much-worn misericord carvings. These were supposedly brought here in the 18th century when the church of St Leonard in the village below was demolished.

The church is a delight, and the location is wonderfully peaceful, with very nice views over the valley below. 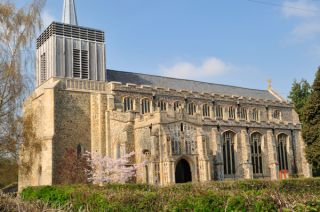