HERITAGE HIGHLIGHTS:   One of the oldest houses in Lavenham 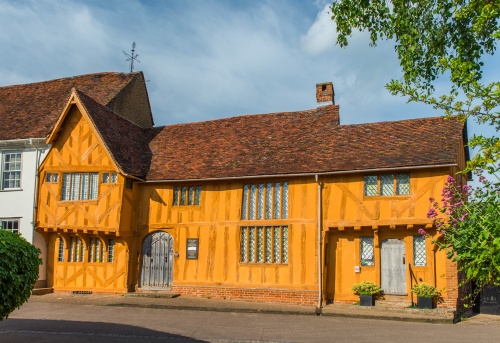 The medieval merchants of Lavenham grew wealthy on the lucrative wool trade. They lavished some of that wealth on the remarkable parish church of St Peter and St Paul, but much of that wealth went to build beautiful new timber-framed houses. Many of these houses survive today, especially in the area around the Market Place.

On the northeast side of the market is one of the finest medieval buildings in Lavenham, a late 14th-century hall house called Little Hall, built by the Causton family.

Construction began sometime in the 1390s, which makes Little Hall one of the oldest buildings in Lavenham. It was a traditional hall house, that is, open to the rafters, with a central hearth. The hall was enlarged around 1425, then in the Tudor period a fireplace and upper floor were inserted, and all the windows were glazed.

The wool trade suffered a decline in the mid 16th century, and the wealth needed to maintain the house was gone. By the 17th century, Little Hall was divided into small cottages to provide housing for 6 families. 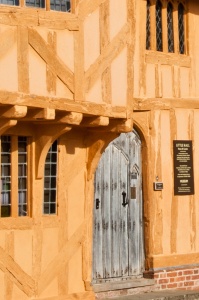 By the early 20th century the house was in very poor condition. It was rescued from decay by the Gayer-Anderson twins, a pair of soldiers and artists with an interest in the arts and collecting. Robert Gayer-Anderson had a passion for Egyptology, and he gained such distinction in the field that King Farouk of Egypt granted him the title of 'pasha'. His name lives on in the Gayer-Anderson Cat, a 4th-7th century BC bronze cat statue of the Egyptian goddess Bastet, which he gave to the British Museum. A replica of the statue created by his brother.

Together the brothers restored Little Hall and gradually filled their house with art objects gathered during their travels around the world, including paintings, sculpture, china, books, and antiquities. When the brothers died many of their antiquities were given to the British Museum in London, but most of their personal collection of art objects remained here at Little Hall.

Seven rooms of Little Hall are open to view, among them the upstairs room, dominated by a crown post supporting the roof timbers. The study has panelling painted with exotic Persian patterns, perhaps an oddity in a medieval Suffolk house, but a testament to the Gayer-Anderson twins. You can get a very good sense of the architecture of this historic house, how it developed, and how it was rescued from decay.

Behind the house is a small walled garden, planted in the style of a traditional Tudor knot-garden, with low box hedges in a formal pattern, and delicate topiary designs. The design of the knot garden was said to have inspired Yvonne Skargon to create the pattern for the 1991 Royal Mail 'Rose stamps'.

Little Hall has rather limited hours - usually afternoons from spring through autumn, so please check first before visiting. If you do miss the opening times, the exterior of the house is very impressive on its own! 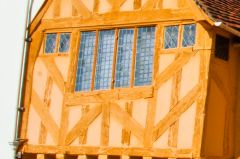 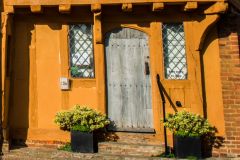