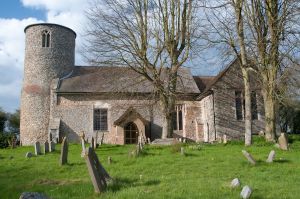 There's not a lot to Bruisyard beyond a few farms and the old parish church of St Peters. The church stands on a small rise of ground on the north bank of the River Alde and is approached under a lych gate and up a sloping path. The first thing you notice about St Peter's is the round tower - this could only be East Anglia!

And, being East Anglia, the tower is quite old; if you look closely you can see bits of Saxon stonework in the tower, so a church obviously stood here well before the Norman Conquest. One unproven but intriguing theory is that the tower was built by a Count of the Saxon Shore as a military bastion to guard the river ford.

The Count of the Saxon Shore was a late Roman leader responsible for defending the east coast from attack by sea. In the Roman era, when the Alde was deeper and wider than it is now, it would have been possible for invaders to sail up the river at least this far, so the suggestion of a Roman date for the tower is at least plausible.

Aside from the tower, much of the remainder of St Peter's shows signs of Norman architecture. The blocked north door is certainly Norman.

There is a lovely 18th-century pulpit topped by a wooden tester to amplify the priest's voice - a sort of early form of loudspeaker. The font is 15th century, with decorated panels, and a shaft supported by figures of lions.

In the nave is a coat of arms which the local parish council website 'proudly' proclaims to be 'the worst executed in England'. This is painted on rough cloth sometime before 1802. Set into the chancel wall is an ogee-headed piscina.

St Peter's is notable for its association with the Franciscan Abbey of Poor Clares, a medieval nunnery, founded in 1367, located on the site of Bruisyard Hall. A pair of Plantagenet duchesses who died at the abbey are buried here beneath the floor of the nave, their graves marked by small brasses.

Also buried here is their confessor, Father Simon Tunstead (d. 1369). Tunstead served as the 23rd English Provincial of the Order of Friars Minor, and it does seem odd that he should be buried here, near a relatively minor abbey.

Another church treasure is associated with the abbey; an embroidered 13th-century psalter made for Sister Anne Felbrigge, one of the nuns at Bruisyard, and the daughter of Richard II's standard-bearer. This is the oldest English example of embroidery on a book and is now held in the British Library in London.

The south transept incorporates stonework from the Abbey, moved here in the Elizabethan period under the direction of Michael Hare, who purchased the Abbey from Henry VIII after the Dissolution of the Monasteries.

Hare and two of his wives are buried here, their graves marked by a floor slab and memorial brasses. Hare's brass is missing, but the two brasses for his wives are still intact and show very nicely the sort of fashion a well-connected lady might wear in Elizabethan times.