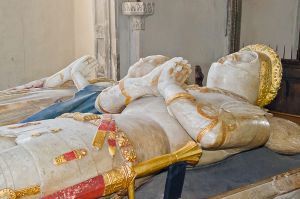 Dennington is an attractive north Suffolk village laid out along the A1120 between Saxtead and Badingham. The parish church of St Mary the Virgin is, without doubt, one of the most satisfying historic buildings to visit in this area of Suffolk (high praise indeed).

There is so much to see that it is hard to know where to start describing it all. The church houses some extremely interesting monuments, notably to the Rouse family of Dennington Hall.

But the prize at Dennington is the Bardolph tomb in the south chantry chapel. This exquisite tomb was erected to commemorate Sir William Bardolph (d. 1441) a Knight of the Garter who served as chamberlain to Henry VI and fought at Agincourt and Harfleur.

The gilded figures of Sir William and his wife lie in almost regal splendour atop their table tomb. His feet rest on a gilded eagle, while at her feet is a striking dragon-like wyvern. Both wear gilded collars, and he bears at his side a magnificent painted and gilded sword.

The effect of the tomb is utterly magnificent, and even today, when some of the paintwork has worn away, you cannot help but be astonished at the workmanship - and the family pride that must have demanded such a show of opulence! 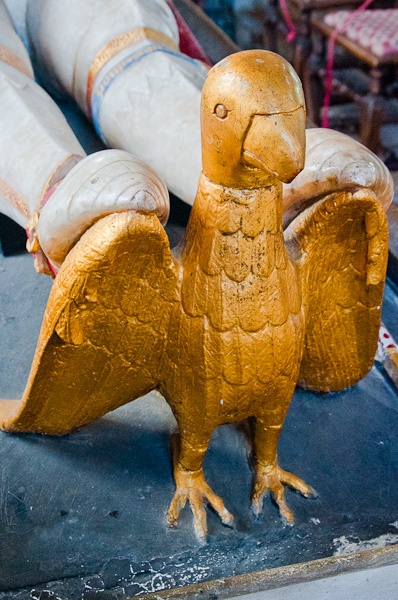 A gilded eagle on the Bardolph Tomb

The tomb has a suitable setting, for the chantry is enclosed within a quite stunning parclose screen, painted and carved with wonderful skill.

Another memorial is that of Anna Wright (d. 1621) who must have died an old maid, if we can read between the lines of the inscription, which reads in part, 'This virgin's love to heaven made her aspire, loathing ye dross of sinful world's desire'.

But more than any memorial, Dennington church is worth visiting for its quite astonishing array of carved medieval benches. Most of the benches date to the 15th century, and are so magnificently carved that will take your breath away if you are not prepared.

The bench ends are carved with a staggering variety of unique and intriguing poppyheads and armrests in the shape of beasts both real and imaginary. Here you will find likenesses of a tortoise, angel, mermaid, two-headed eagle, hounds, and other strange and wonderful creatures (including one that may be a giraffe). 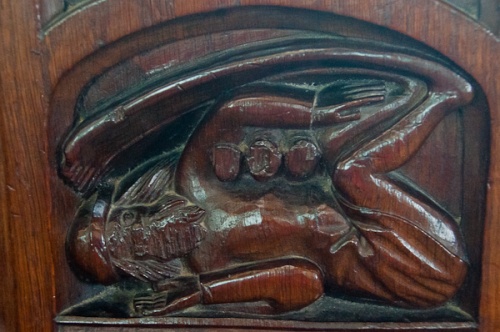 The prize carving is of a sciapod, a mythical creature reputed to live in a far-off desert, who had but one oversized foot, this foot being curved in an enormous arch such that the sciapod could lie on its back and use its huge foot as a parasol to protect it from the heat of the sun's rays. This is the only known carving of a sciapod in England, and it would be worth coming to Dennington for this one carving alone, were there not so much else to see.

On the left-hand column flanking the 14th-century south chancel window is a carving of a Green Man in superb condition. How this carving escaped the attention of iconoclast William Dowsing is anyone's guess. Dowsing visited Dennington in 1644 and proudly recorded that he destroyed '10 angels, 2 holy water fonts, 9 pictures of angels and crosses, a holy water font, 10 superstitious pictures, 2 superstitious inscriptions of Christ, and a cherubim'.

In the sanctuary hangs one of only four medieval pyxes in England. There is an old bier and an old clock mechanism that once worked the clock-face in the tower, an aged wooden parish chest bound with iron straps, and a Cotswold shepherd's crook once used by a local rector.

It is hard to imagine a more satisfying historic church to visit than Dennington St Mary's. Highly recommended.