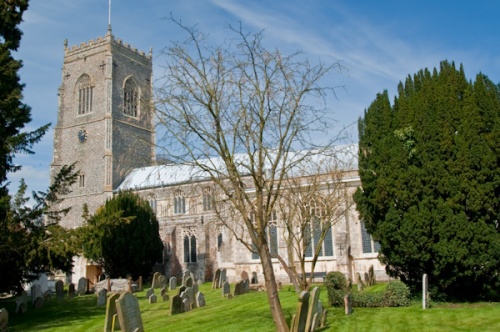 The church of St Michael the Archangel in Framlingham is one of my favourite churches in Suffolk. Most people who come to Framlingham do so to visit the castle, and on their way to the main castle entrance, they troop by the tree-shrouded churchyard, unaware that they are missing a wonderful historic building that is every bit as interesting as the castle itself.

The first iteration of St Michael's was built around 1200, and there are fragments of that early church incorporated into the current 15th - 16th-century building. The glory of St Michael's is the extraordinarily large chancel, built almost entirely by the Howards of Framlingham Castle.

The Howards' first family mausoleum was at Thetford Priory, but this was lost when the priory fell foul of Henry VIII's Dissolution of the Monasteries. The Howards, Dukes of Norfolk, cast around for a new location to bury the great and good of their family, and their eyes fell upon the parish church of Framlingham, practically in the shadow of their castle walls.

They began the chancel here as their new mausoleum, and construction was finished in 1554. But the Howards had little time to make the chancel their own, for the staunchly Catholic family lost influence during the tumult of the Reformation. The Howards retreated to their castle at Arundel in Sussex, leaving behind a superb church for the people of Framlingham to enjoy.

Before the Howards left Framlingham they had time to bury five of their own in grand style, and it is these Howard tombs that make the church such a delight to visit. The Howard tombs are ornate to the point of garishness, a statement of self-importance by a proud family at a time when it was expected that rich families would express their wealth and influence as ostentatiously as they could. 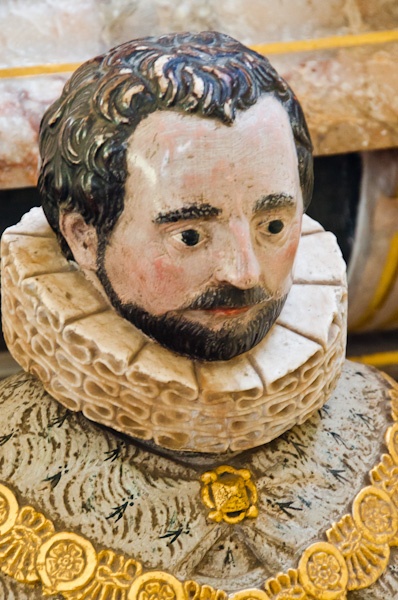 The oldest Howard tomb is that of Henry Fitzroy, an illegitimate son of Henry VIII and husband of Mary Howard, daughter of the 3rd Duke of Norfolk. Fitzroy's tomb is decorated with friezes of Old Testament scenes. My favourite of all the Howard tombs is that of Henry Howard (d. 1613), the Earl of Surrey, and his wife Frances (de Vere).

This exquisite table tomb is topped with gilded effigies of the couple, with kneeling effigies of their offspring at each end of the table. The effect is either entrancing or repulsive, depending on your tastes. The tomb was not built until the early 17th century, almost 70 years after Howard was executed in 1547 (this happened a lot to the Howards during the Reformation).

On the north side is a tomb to Mary FitzAlan and Margaret Audley, the two wives of Thomas, the 4th Duke. The Duke himself is not represented here; he was executed for his part in a plot against Elizabeth I. On the south side of the sanctuary is the tomb of Thomas, the 3rd Duke and architect of the Howard mausoleum at Framlingham.

Almost lost amid all the Howard splendour is the tomb of Sir Robert Hitcham (d. 1636), who bought Framlingham Castle when the Howards left for Sussex.

One of the most interesting features of the church is not in the chancel, however, but in a gallery at the west end of the nave. Here you will find a late 17th and early 18th-century organ, one of the oldest organs in an English parish church.

Other features include a medieval wall painting on the nave arcade and the font, carved with alternative figures of lions and Suffolk woodwoses, the wildman of the woods, who carries his club with fierce intent, as if he's not afraid to use it.

St Michael's is a wonderful church to visit, with enough to interest even the most jaded churchmouse! 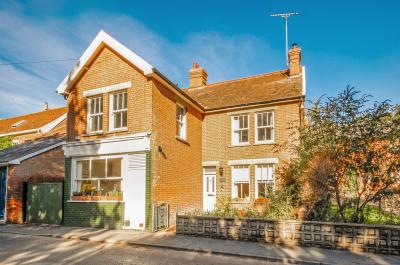