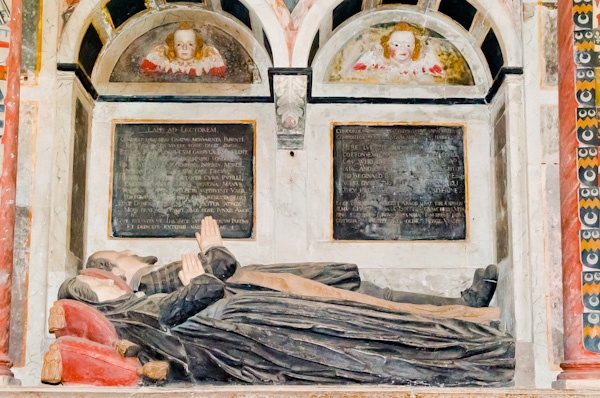 St John the Baptist at Badingham is a fascinating country church, dating mostly to the 13th century, but with enough surviving bits and pieces to suggest that there was an earlier Norman church on the site.

With so much to see that it is hard to know where to start, so let's begin with the orientation of the building. Rather than being aligned on the usual east/west line, St John's is set on a Northeast/Southwest line, so that the midsummer sun shines through the east window.

This is likely because St John the Baptist's feast day is traditionally celebrated on midsummer day, but it is interesting to speculate how much this sort of solar alignment is tied to older, pre-Christian folk customs.

St John's boasts one of the most important Seven Sacrament fonts in East Anglia, one of only 13 in the county of Suffolk. The style of carving and the details of costumes depicted by figures on the eight font panels suggest that it was carved around 1485. Like the church itself, the font is deliberately aligned. The west face depicts the Mass, which a viewer behind the font would have been able to see for real at the high altar beyond.

Proceeding in a clockwise direction around the font, we next come to a carving of Penance, Extreme Unction (Last Rites), and Christ's Baptism by John the Baptist, and, facing the altar, a baptism scene. Interestingly, the baptism scene depicted is using a font similar in style to the Badingham font.

Carrying on around the font is a panel showing Matrimony, Holy Orders, and Confirmation. Many of the carved figures were defaced during the Reformation, but the carving is still of a very high order. 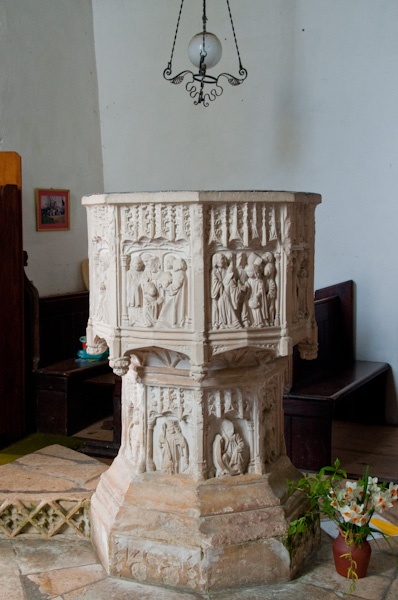 Worthy of special note is the wonderful Extreme Unction panel. This shows mourners gathered at the bedside of a dying man. So realistic is the carving that the man's chamber pot and a pair of shoes are shown under his bed.

Look closely at the Mass panel; you can see two heads peeping around the top of the parclose screen. Now cast your eyes down to the base of the font where there are still more wonderful carvings. My favourite is what appears to be a Suffolk woodwose, a Wild Man of the Woods, carrying his traditional club.

High above the font is a glorious hammerbeam roof, one of the finest in Suffolk. The roof is adorned with carved figures of angels, many of them beautifully carved, as is the decorative frieze between the hammer beams. The angels are not original, but a late Victorian replacement for the original 16 angels taken down by the iconoclast William Dowsing in 1644.

There is a very odd niche set into the north wall, perhaps meant to contain a statue, but if so, it has long disappeared. More interesting is a wonderfully painted tomb of William Cotton (d. 1616) and his wife, in the chancel. This tomb has lying effigies of the dead couple, with a pair of beautifully dressed children kneeling on the panel below. This Grade I listed tomb is decorated with the crests of the Cotton and Rous families. 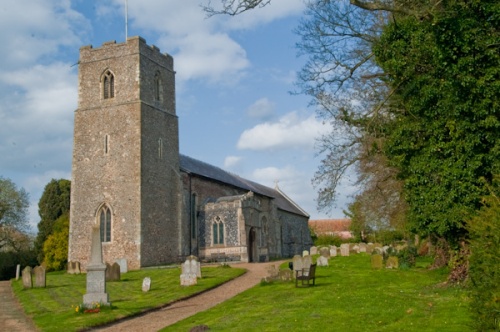 Even earlier is an altar tomb in the north-west of the chancel, probably dedicated to Sir John Carbonell (d. 1423). The nicely carved pulpit is Jacobean, but even more interesting are the carved figures adorning the screen; these are like pagan fertility figures, and might be rather simplistic depictions of native American women based on uninformed reports from the New World. Or not!

And speaking of carvings, a pair of 12th-century corbels are worth noting. One of these looks like a rabbit to me, though it may well be a cat. Another shows a rather perplexed figure with his hands to his head. Outside the south porch, flanking the doorway, are figures of a dragon and another Woodwose, while one of the buttresses shows a dog with what looks to be a bowl in his mouth.

All told, Badingham's church is a gem. And despite the fairly busy A1120 at the top of the village, there was something about the place when I visited; an ambience of peace and timeless Suffolk countryside beauty. I liked it so much that I started looking around the village to see if there were any houses for sale!

More self catering near Badingham, St John the Baptist Church >>