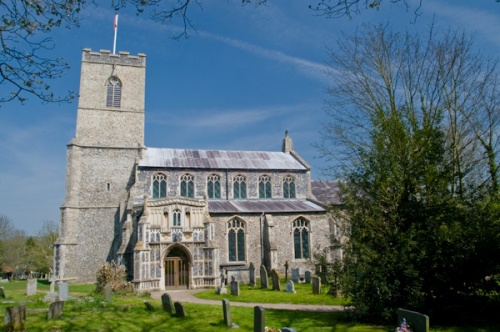 The village of Fressingfield packs a lot of history into a small area. At the heart of the village is the superb parish church of St Peter and St Paul, built about 1320 on the site of an earlier church. At the east end of the nave gable is a sanctus tower, considered to be the finest such tower in Suffolk. The church is famous for its marvellous series of carved bench ends and its 15th-century single hammerbeam roof.

The most notable of the benches is the so-called 'Passion bench', carved with scenes from the New Testament Passion of Christ. The benches date to about 1470, and though a few show signs of Puritan zealousness, enough of the original carving remains to amaze even the most jaded modern visitor.

Most of the 18 benches in the nave terminate in threefold poppyhead carvings. The backrests of most benches are carved with intricate designs including heraldic shields, trefoils, flowers, and mouchettes (a teardrop, or dagger-shaped Gothic design often used in tracery).

Among the many symbols carved on the nave bench ends are a coat of arms (possibly to the Talbot family), a wheel, bird, gryphon, a dog, saints, and numerous examples of linenfold and tracery designs. The workmanship is superb, and the effect is stunning to behold.

The most famous native of Fressingfield is Archbishop Sancroft, who rose to become Master of Emmanuel College, Cambridge, and Dean of St Paul's in London. Sancroft was responsible for overseeing the rebuilding of St Paul's after the Great Fire of London. He also spent time in the Tower of London for his outspoken views. Sancroft's tomb is outside the south porch, and his portrait hangs in the south aisle.

The striking south porch of flint is probably the work of Catherine de la Pole of Wingfield, built as a memorial to her husband, killed at the siege of Harfleur, and her son, killed at Agincourt. Look up as you pass through the porch and you will some very fine vaulting supporting the roof. 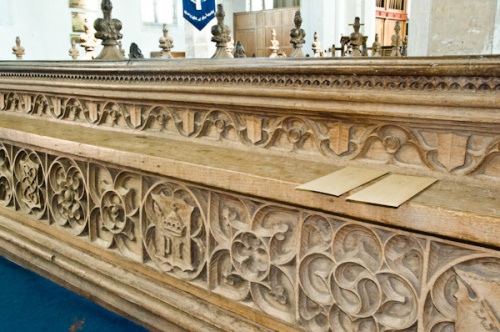 There are four medieval burial slabs set in the floor of the north aisle, and another two in the chancel floor, one of which has a small chalice brass still set in the stone. The chalice symbol was used to indicate the burial place of a priest. In the chancel is a brass to William Brewes and his wife Elizabeth (d. 1489).

Look up and you can enjoy one of the best single hammer-beam roofs in Suffolk. Interspersed amid the beams are heraldic shields to the families of Ashfield, Garney, Muschamp, Welbeck, Clouting, and Toppisfield, as well as those of Cambridge University and Emmanuel College, which had the living of Fresssiognfield for many years.

The angel figures that once decorated the roof have been removed, as has the rood loft, but there are fragments of original woodwork in the chancel screen.

The north-east chapel was once the Guild Chapel of St Margaret, a fact that is remembered by a wooden figure carved on a corner post of the Fox and Goose Inn just outside the churchyard. 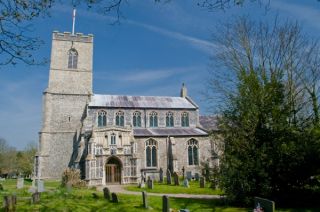