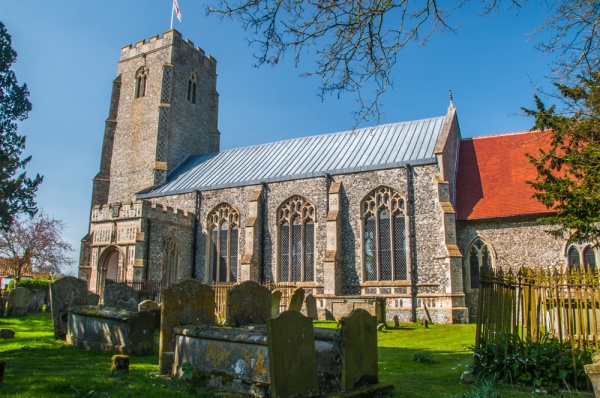 The scattered village of Worlingworth has been described as 'a hidden corner of Suffolk'. That's an apt description for this pretty rural spot, with the tower of St Mary's church rising high above picturesque groups of cottages.

St Mary's church boasts some of the finest flint flushwork decoration of any church in Suffolk, but most people come to see the remarkable double hammer-beam roof and the ornately carved 15th-century font cover.

St Mary's dates to at least the 13th century but it stands on a site that has been used for worship since pre-Christian times. The church was enlarged in the 15th century with the addition of the present nave, south porch, and striking west tower, decorated with flushwork up the sides of its angle buttresses.

The interior is dominated by the superb 15th-century roof, decorated with carved angels bearing heraldic shields. 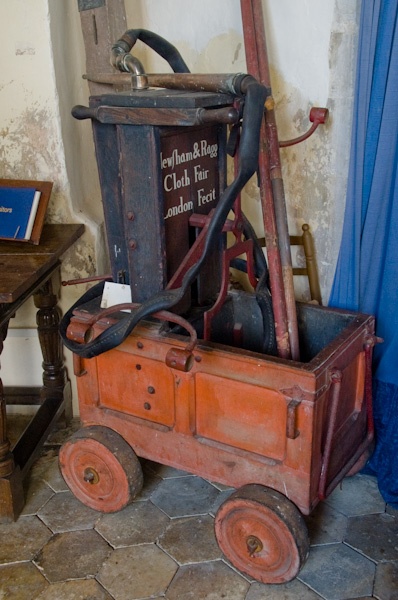 Almost sedate by contrast are box pews dating to 1630, with carved bench ends. The pulpit is of the same age and carved in a similar style, with Romanesque arches decorated with fleur-de-lys symbols in the spandrels. At the east end of the nave is the dado of a 15th-century screen. You can make out the figures of saints on the screen base, though they have been somewhat obscured by brown paint.

On 25 October 1810, the Henniker family of Worlingworth Hall gave a huge feast in honour of King George III's 50th year on the throne. In the south aisle hangs a large painting depicting the celebration, dubbed the Worlingworth Jubilee Feast.

The painting is a fascinating piece of social history. You can see members of the army attempting to persuade a farm labourer to enlist, while his wife tries to pull him away. In the foreground is a beer tent with kegs, and villagers dancing to the music of country musicians. In another part of the scene a man tries and fails to catch a dog, while three boys engage in a game of cricket.

As many as 5000 people were said to have attended the celebrations. Not surprisingly, the royal coat of arms on the north nave wall is also to George III and is dated 1810. 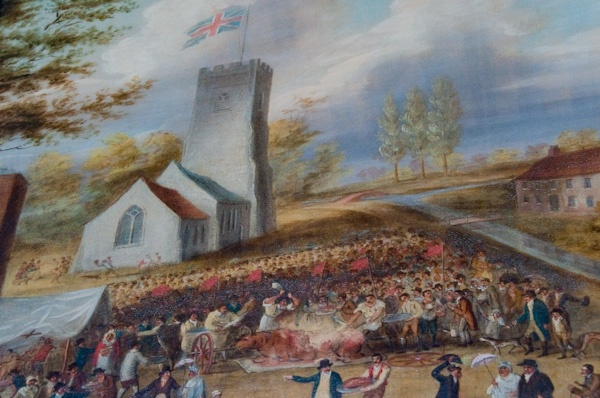 The painting of the Worlingworth Jubilee Feast, 1810

In a corner of the nave stands a very unusual historic relic; a large ash beam used as an ox-spit at the Feast. The beam is 15 feet long and was said to have held an ox weighing 50 stone (500 pounds). According to the local carpenter, the wood was green, and when the ox was roasted the heat caused sap to run from the wood and taint the meat. The spit made a public appearance (but was not used) in 1887 when a celebration was held in the park to mark Queen Victoria's Golden Jubilee.

At the west end of the nave is the late medieval font, topped by an extravagant cover that rises high above the tower arch. The cover is truly remarkable, rising in diminishing stages like a steeple and decorated in vivid colours of red, green, and gold. The cover seems exceptionally ornate for such a small country church, and indeed a local tradition suggests that it was brought here from Abbey at Bury St Edmunds when the Abbey was suppressed at the Reformation. The richly carved font is also said to come from the abbey.

At the rear of the church is the original parish fire engine, a gift to the parish of Sir John Major of Worlingworth Hall. The engine was made in 1760 by Newman and Ragg of Cloth Fair, Smithfield, London, and was the first type of engine to use compressed air. It was used until 1927 then given a 'retirement' in the church. Looking at the mechanism you would never guess that it was said to emit a stream of water as high as the bell tower, about 150 feet in the air. 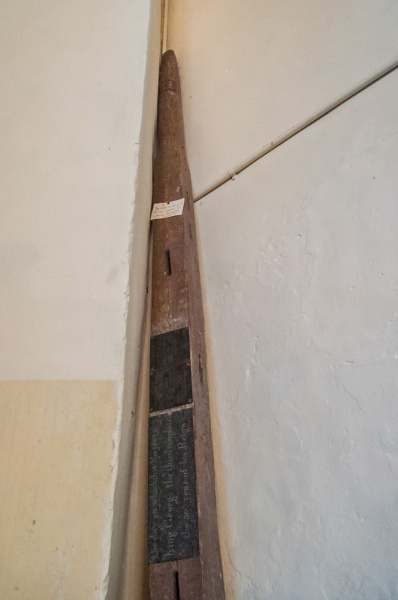 The ox-spit used at the Jubilee Feast in 1810

In the chancel are memorials to the Major and Henniker families of Worlingworth Hall and Thornham Hall, respectively. Perhaps the best is to Sir John Major, who died in 1781. A later memorial commemorates Elizabeth, the Dowager Duchess of Chandos, who died in 1813. The 17th-century communion table is very unusual in that it has a drawer, making some historians suggest that it was originally intended as a piece of domestic furniture.

There are small fragments of medieval glass in the upper lights of the nave windows.

There are several very faded wall paintings, including what must be a figure of St Christopher in his customary position on the north wall, opposite the main entrance. The upper part of the scene has been lost, but you can see the fish swimming around the saint's legs as he crosses the river, carrying the Christ child. On the south side of the chancel arch is another partial wall painting showing the fleur-de-lys symbol. This is probably the site of an altar for the Holy Trinity Guild, whose symbol was the fleur-de-lys.

On the tower arch is a fascinating inscription reading:

The Bell Tolled XII hours, Aug. 16th. 1821 And A Funeral Peal Rang After As A Token Of Heartfelt Grief At The Death Of Her Majesty Queen Caroline.

St Mary's is a delightful church, full of historic interest. Though the hammer-beam roof and the amazing font cover will rightly draw your attention, I found the painting of the Worlingworth Jubilee Feast to be equally fascinating. It provides a wonderful glimpse into the life of rural England at the start of the Regency period. St Mary's is usually open daylight hours to visitors and was open when we visited. 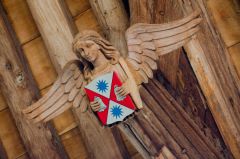 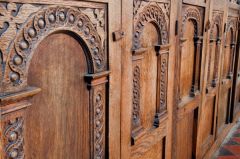 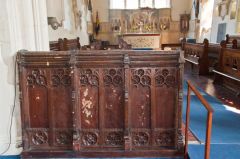 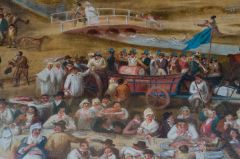