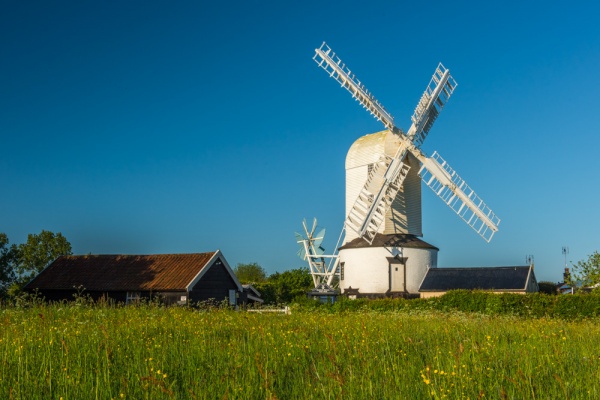 By the large village green in Saxtead Green stands a historic post mill built in 1860 on the site of a mill that existed here as early as 1287. The mill continued grinding corn until the Second World War when it was converted to grind grain for animal feed. It ceased operation in 1947 and was restored a decade later.

A mill has stood at Saxtead Green since at least 1287. Records for Framlingham Magna manor in 1279 record 2 working mills and a third which had fallen into decay. It seems likely that the mill at Saxtead was built to replace that mill and perhaps reused timbers from the old building.

It was built on a completely new site, for records show that it cost 21 shillings to prepare the 'Great Mount' for erecting the building. Records are remarkably detailed, showing such expenses as 9s 2d for 110 ells of canvas to make sails for the new mill, and 33s for the millstone. 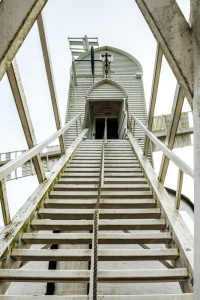 Climbing up the fan carriage

The earliest post-medieval mill for which we have historical details stood on this spot in 1796 when the miller was Amos Webber. A new house was built for his successor, Robert Holmes, in 1810.

Saxtead Green mill is a four-sailed post mill, which means that the lower body of the mill revolves around a central post, or pole. The mill body is about 46 feet in height, and the sails span 54 feet. There are three floors inside the roundhouse, and visitors can see the internal workings of the milling machinery.

Though the Saxtead Green post mill is under the care of English Heritage, it is cared for by tenants, and it is the tenants who welcome visitors on open days. The mill is very easy to find, being located at the road junction in the centre of Saxtead Green. There is no signposting, at least none that I could see, nor is there a parking area. I found a place to pull off the road beside the large village green.

You can climb the extremely steep steps to the first floor, where you see the mechanism fantail up close. Inside the mill, you can see the central post and gear mechanism at close hand. A ladder leads to the second floor where you will find a pair of grinding stones and another ladder to the top floor where the grain was loaded. Here you can see the timber supporting the huge central post.

At ground level is a fascinating exhibit on the history of the mill. One of the most interesting displays tells the story of how the mill was decorated to celebrate Queen Elizabeth II's coronation in 1953. The mill was illuminated by floodlights made with pails and pyrex dinner plates, as manufactured goods of any type were hard to come by in the post-war years.

It is a shame that the Saxtead Green mill is not better known. It is a fascinating historic building with a long and rich history, in a wonderful rural location. 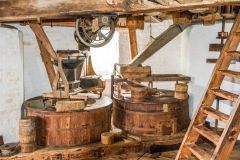 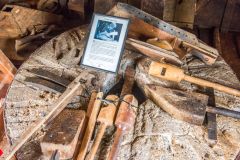 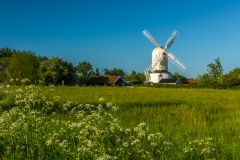