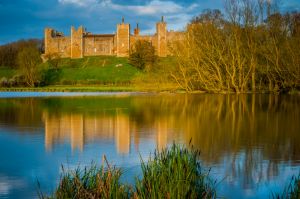 The historic market town of Framlingham is one of my favourite places in Suffolk. There's a lot of history packed into a small area, with historic buildings, a medieval castle, a fabulous church and a scenic nature reserve all within an easy stroll of each other.

There was a settlement here in Saxon times, and Framlingham is mentioned in the Domesday Book. It must have been a sizeable place at that time, for there were three manors mentioned. William the Conqueror granted Framlingham to Roger Bigod, and it was a later Bigod, also named Roger, who began construction of the massive stone castle.

The Bigods lived at Framlingham Castle until 1306, and it subsequently passed through the hands of some of the most powerful families in medieval England, the Mowbrays, Dukes of Norfolk, and the Howards, also Dukes of Norfolk. Mary Tudor was staying at the castle in 1553 when she received the news that Henry VIII had died.

Framlingham was granted the right to hold a market in 1285, a right which went a long way to ensuring the prosperity of the town. The town is based around a long, broad market place, with historic buildings clustered beside more modern counterparts.

At one end of the market place, a road climbs a slight hill towards the castle, passing the church of St Michael on the left. The church is an absolute delight, with a medieval wall painting looking down on the tombs of several generations of Howards in the huge chancel. Among the tombs is that of Henry Fitzroy, the illegitimate son of Henry VIII, who married a Howard heiress. The most grandiose of the tombs is the gilded memorial to Henry Howard, Earl of Surrey.

As for the castle, it passed from the Howards to Sir Robert Hitcham, who left it in his will to Pembroke College, where he had studied. Hitcham wanted the castle torn down and replaced by a poorhouse. The poorhouse was built within the castle walls, but the destruction of the castle was only partly carried out, which is just as well for modern visitors, as we can see just how impressive the medieval stronghold must have been at its height.

The castle looks down on The Mere, a wide expanse of wetlands now set aside as a nature reserve.

Framlingham is a delight to explore; large enough to have plenty of interest and visitor facilities, and small enough to feel welcoming and easy to get around. It is well worth a relaxing visit. 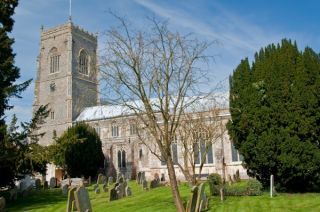 More self catering near Framlingham >>

More bed and breakfasts near Framlingham >>