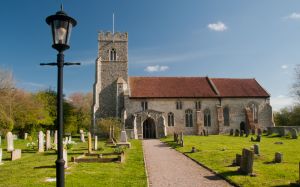 The medieval church of St Andrew at Kettleburgh dates mainly to the 14th and 15th centuries. The church consists of a nave, chancel, south porch, and a late 14th-century west tower, of knapped flint. The chancel roof is the original 15th-century construction, but the nave roof was rebuilt in the Victorian period.

There has been a church at Kettleburgh since Saxon times. At the time of the Domesday survey, there were two manors here; one held under the patronage of Ely Abbey. The current St Andrew's is mainly a 14th-century building, but a Saxon window was discovered during 20th-century repair work.

Also of great age is a 13th-century coffin slab in the chancel and a stone coffin set into the south-east nave wall. Nearby is a blocked archway which marks the site of a chantry chapel for the Charles family.

On the east side of the arch is a 14th-century piscina that once served the altar for the chantry. The Charles's lived at Kettleburgh Old Hall from 1265 until 1507. Part of the moat that used to surround the hall can be seen to the north-west of the church.

There is an attractive 15th-century octagonal font of the sort one seems to find in so many Suffolk country churches. The font was a gift of Lady Alice Charles (nee Ramsey) in memory of her husband, Sir Thomas (d. 1419), and the heraldic panels depict the arms of Ramsey, Charles, and Kenton. The pulpit is Jacobean, with some nicely carved panels. The rood screen is of similar date, with dadoed panels.

Much more interesting are the 15th century carved poppyhead benches in the nave. Carvings include a mythical beast with stag horns, a man riding a lion, a tower (look for the face looking out an upper window), and a figure with a loaf. Most of the benches came from St Mary at Quay in Ipswich after that church was declared redundant following heavy damage in WWII.

There is a royal coat of arms to Queen Anne by the tower arch. This displays the insignia of England and Scotland, so must have been painted shortly after the Act of Union in 1707. There are also some nicely painted Commandment Boards and a very small parish chest, also from the reign of Queen Anne.

The oldest tomb inside the church is a partial memorial brass to Arthur Pennington (d. 1593) and his two wives, at the north-east corner of the chancel.

The church guide relates an amusing incident that occurred one Sunday afternoon in 1879. It seems that a local man had been indulging in drink. He brought his dog into the gallery, and in the middle of a service urged his canine friend to 'speak to 'em, lad'.

This the dog proceeded to do, and made a great fuss of barking. The service was abandoned, and the Verger and his son had to forcibly evict the man and his beast.

The miscreant was tried by a Chairman of the Bench, himself a clergyman, who remarked that he was loathe to give an impression of bias, so he fined the man £2.50 plus court costs, rather than giving him the prison sentence he deserved.