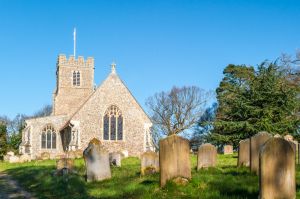 St Andrew's, Marlesford, is a simple country church, dating to the 14th century, with some earlier 12th-century stonework in the piers of the south aisle. There is a 13th-15th century west tower and a 15th-century nave of six bays with a largely original roof. One of the most obvious interior features is the richly coloured Victorian glass, the work of the Ward & Hughes company.

However, for my money, the most interesting historic feature of St Andrew's is the 17th-century wall monument to William and Avis Alston. This shows a pair of busts set in wreaths inside a classical frame. The monument was erected by the couple's daughter Avis, and the dedication reads:

'To the memory of William Alston Gent who married Avis, daughter of Jeffrie Pitman of Woodbridge in the county of Suffolk Esq. & had issue 3 sonnes & 5 daughters, Avis the eldest daughter, who in the pious memory of her deceased parents hath here erected this monument. He died the Xth of June, 1641.'

Other notable monuments include one on the north nave wall to Lemuel Shuldham, who died at the Battle of Waterloo.

At the back of the church is simple dedication board commemorating a bequest of bread to the poor of the parish. Such bequests were a common way for more prosperous residents to leave something behind for future generations. Many, like this one, make the gift of bread contingent upon the poor person attending church services. The dedication reads, 'John Smith of this Town Gent. Deceased Jan:Y:29 1693. And gave one doz. of bread every Sunday for ever to such of ye poor of ys parish as come to hear Divine Service and the Sermon'. So, if you wanted the alms, you had to sit through a sermon first!

In the chancel is a small brass plaque commemorating Sergeant Major Flora Sandes, daughter of a Victorian rector, who went on to have a lengthy career in the St John Ambulance and the Serbian army. Her life was detailed in the biography 'The Lovely Sergeant'.

Other features include a very simple 15th-century octagonal font, a finely carved Jacobean pulpit, and a set of Victorian benches with poppyhead bench ends.