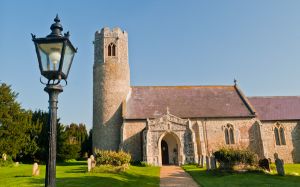 This area of north-east Suffolk has a lot of round tower churches, but I have to say that Gisleham's is one of the most attractive. The tower of Holy Trinity has a base that may be late Saxon and is topped with an octagonal belfry made of red brick. The belfry may be as early as 14th century.

The remainder of the structure is composed of a nave and a narrow chancel. The building is almost entirely flint with stone dressing at the essential corners. Above the south porch entrance door are a pair of worn carved figures and an empty statue niche which has been altered to fit a sundial.

The interior of the nave and chancel show evidence of Norman and Early English style (look for the Norman shafts and capitals in the blocked north doorway), with some rather obvious Victorian remodelling.

The most interesting historic feature at Gisleham is a series of striking 15th-century wall paintings on the north wall of the nave, illustrating female saints with rays of light and angels above. The saintly figures are the subject of some debate; no one seems quite sure who they are meant to represent, but if you leave aside scholarly dispute, you can just appreciate the figures for what they are; wonderful examples of late medieval art.

The font is a traditional Anglian design with four seated lions supporting a central shaft, and a bowl decorated with faces peering out from trailing vines. There are a 14th-century sedilia and a piscina in the sanctuary. Nearby, on the north side of the chancel, is a grave slab to Adam Bland, who died in 1593. Bland's brass inscription and a coat of arms have survived, set into a different stone.