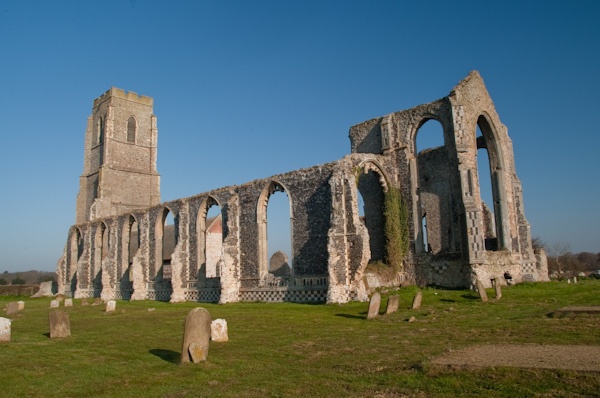 St Andrews church in the Suffolk village of Covehithe is a very peculiar church in an exposed position on the Suffolk coast. St Andrew's was once a glorious medieval building, but by 1672 the inhabitants were finding the upkeep of their grand church too difficult, so they got permission to remove the roof and build a much smaller thatched church within the ruins. So, in essence, you have a church built within a church.

The bulk of the medieval church was built in the 15th century by the incumbent, William Yarmouth, who prevailed upon his friends for money to rebuild the earlier church on this site. The striking tower was used as a landmark for sailors along the coast. 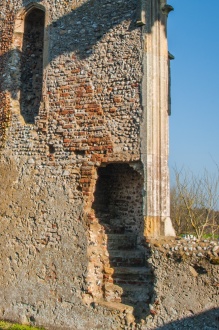 Remains of the
medieval rood stair

By the late 17th century it was clear that the small community of Covehithe could not sustain the large medieval church. A new, much smaller church was built within the walls of the medieval building, reusing the medieval stones. Both the north and south doorways come from the original medieval building, but the east window is Victorian.

The small church is still in use, but the tower is no more than a wonderful landmark, and the interior is usually inaccessible. The tower dates to the 14th century, though the body of the church was probably much earlier.

The original medieval font is preserved in the newer 17th-century church. The ornate octagonal font is fascinating, with vividly carved depictions of lions and the woodwose, a traditional Suffolk 'wild man of the woods'. These hairy figures have had their heads destroyed, presumably by William Dowsing and his gang of 17th-century iconoclasts who caused so much damage to 'idolatrous' medieval carvings throughout East Anglia.

Several 15th-century benches with poppyhead bench ends were also rescued from the earlier church. The pulpit has 17th century carved panels, and under the tower hangs a painted royal coat of arms to George III.

The walls of the medieval church now stand like forlorn windbreaks, enclosing the newer building. You can see several medieval corbels that once supported the chancel roof, and the buttresses bracing the tower have decorative flushwork panels and canopied statue niches.

The tower is in the care of the Churches Conservation Trust but is usually closed to visitors, though the ruins are freely accessible and the small church is usually open. 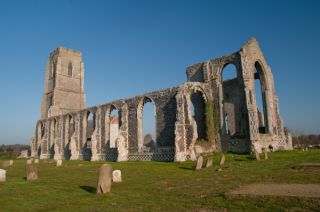