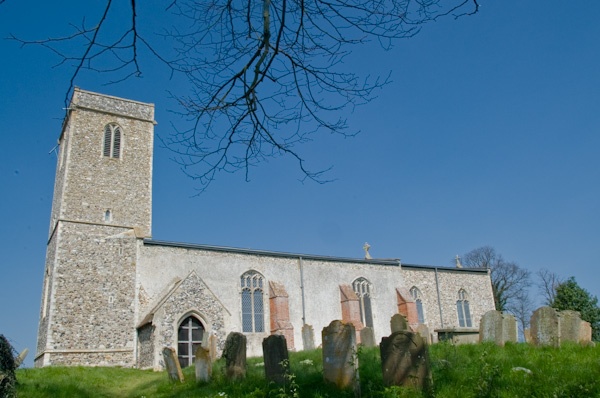 I've never seen a more box-like medieval church than All Saints at Ellough. The building is so squared off in places you can imagine a medieval mason getting out his axe and lopping off anything that stuck out!

That's not to suggest the building is unappealing at all - just unusual! The church dates to the 14th century, with the addition of a south porch in 1602. The Victorians had a go at it, as they did most parish churches. In this case, William Butterfield headed the restoration and was responsible for the reredos and the east window.

We do not know when the first church was built at Ellough, but the name may provide a clue. The village was called Elga in the Domesday Book, which may have evolved from the Norse word 'Elgr', meaning a pagan temple. So it seems at least plausible that there was a pre-Christian holy place on the site of the current church.

The tower of the current building is 14th century, though the lower windows are 15th century. There are further 15th-century Perpendicular windows lighting the nave and chancel. There is a blocked north doorway in the nave which may be late 12th or early 13th century. The nave roof is a 15th century cambered tiebeam construction, with the beams resting on beautifully carved stone corbel heads, several carved with long, flowing beards.

The font bowl is late 15th century, with alternating panels of Tudor roses and blank shields. Set into the sanctuary floor are brasses to Margaret Chewt (d. 1607) and Anne Gosling (d. 1612) in addition to an early 16th-century brass to an unknown woman. A much more modern memorial is a plaque with brass portraits to a Victorian rector, Reverend Richard Arnold and his wife.

All Saints is in the care of the Churches Conservation Trust and is no longer used for regular worship.

More self catering near Ellough, All Saints Church >>

More bed and breakfasts near Ellough, All Saints Church >>