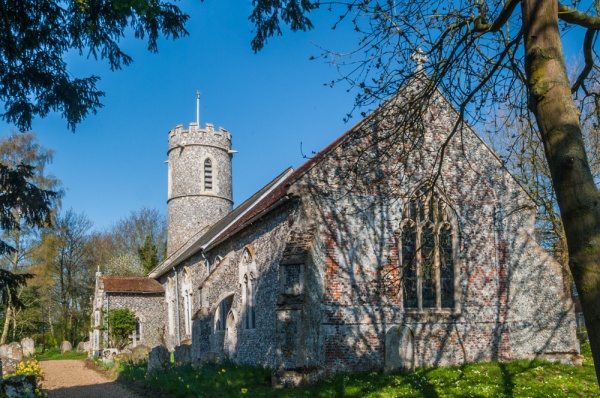 The Suffolk village of Spexhall probably takes its name from the Old English 'specht halh', meaning the place of the woodpecker. You can still see (and hear) woodpeckers in the churchyard. There was a village at the time of the Domesday Book of 1086, though no church is mentioned.

St Peter's church stands a mile west of the old Roman road known as Stone Street and well away from most of the village. The church is built on high ground, with beautiful views on three sides over the valley of the River Blyth.

The oldest part of the church dates to around AD 1150, though it may well stand on the site of an even earlier building. The blocked north doorway is carved with traditional Norman motifs. 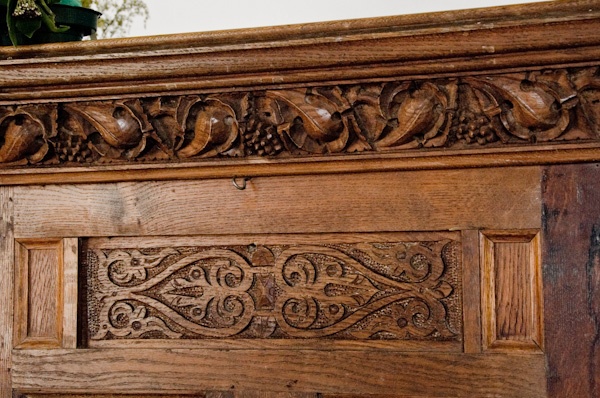 Jacobean panelling in the nave

Set into the south wall of the chancel is a 15th-century priest's door, but at the base of the door is a fragment of re-used 12th century Romanesque carving.

The striking round tower at the west end of the nave is a modern replacement of the original 12th-century tower, that fell down in 1725. The tower was rebuilt in 1911 and dubbed 'King Edward's Tower' in honour of Edward VII. In the tower is a single medieval bell, cast in Norwich in the late 15th century.

The south porch is 15th century, restored in 1733. Look for historic graffiti in the window embrasures. Among these are two sets of initials and dates, including 'John Browne 1658' and 'RM 1666'. The earliest date inscribed on the window stone is 1591. 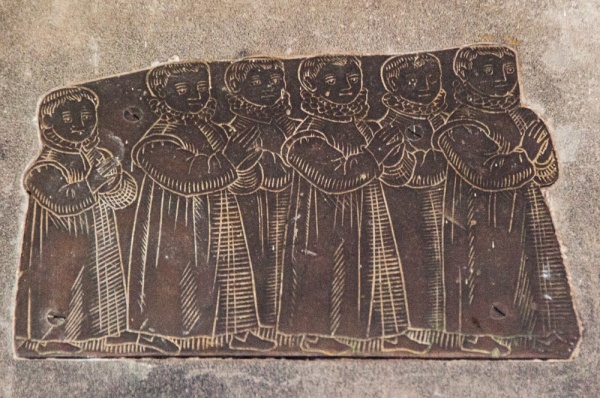 Inside the church, a few 15th-century benches with carved poppyhead ends have survived in the choir. Several of the poppyhead carvings have holes in the heads, carved to hold a lighted taper.

The font is late 15th century, in typical East Anglian style, with its octagonal bowl carved with shields.

The pulpit is 19th century, but incorporates 17th-century carvings. The north nave window has 15th century stained glass depicting coats of arms to four local families, the Willoughbys, Banyards, Bumpstedes, and Bacons. The colourful east window was installed in honour of Queen Victoria after her death in 1901.

On the south nave wall is a collection of funeral brasses to members of the Browne family of Burghards Manor. The oldest brass is an inscription to John Browne (d. 1591). Nearby is a small brass figure of his wife Maria (d. 1593) and the figures of their six sons as 'weepers'. In front of the altar is the early 17th-century gravestone of Sarah Downing.

Near the south door are several old panels dated to the Jacobean period, and against the wall is an old plough, made about 1920 and used for generations at White House Farm. It was given to the village as a museum piece and stored in St Peter's in 1994. 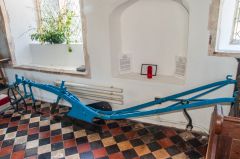 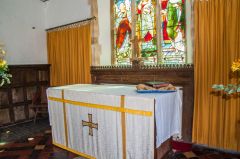