The village of Stradbroke lies just a few miles from the Norfolk border. Now a large village, it was once a market town, with a weekly market every Friday and an annual fair.

The most famous native of Stradbroke was Robert Grosseteste, born around AD 1168. Grosseteste was a notable scholar and served as Master of the Schools at Oxford University before being made Bishop of Lincoln.

Grosseteste would have been familiar with an earlier version of All Saints church, but not the present 15th-century building. At the time of the Domesday Book the church was owned by Eye Priory, but by the 14th century, the living was in the hands of Wingfield College.

The powerful de la Pole family were closely linked with the College, and they were probably responsible for rebuilding All Saints in the 15th century. Over the west doorway of the tower are carved roses and coronets that suggest that the tower was built by William de la Pole, who died in 1450. All Saints boasts a 100-foot-high tower which can be seen for miles in all directions. The tower is without doubt one of the finest in Suffolk, with a staircase turret and an embattled parapet decorated with grotesque gargoyles. The church features excellent late medieval flushwork, though the interior is more notable for its Victorian stained glass and finely carved woodwork installed during a restoration in the 1870s.

That restoration took place through the efforts of the vicar, Rev. JC Ryle, one of the foremost Evangelical figures of his day. Rev. Ryle was active in restoring several medieval churches, notably Helmingham, and in 1870 he wrote a tract appealing for funds. His tract raised 2700 pounds, an enormous sum in that period, and much of what we see today is because of his efforts and the sympathetic treatment of architect Richard Makilwaine Phipson.

The pride of Stradbroke is the beautifully carved 15th-century font. It is in typical East Anglian style, with an octagonal bowl carved with figures of angels holding shields. It is the stem of the font that really deserves attention. It is carved with alternating figures of lions and woodwoses, the Suffolk wild man of the woods. Each woodwose is in a different pose. some hold clubs, as is traditional, but one is shown clubless, with his hands beginning to part his long beard.

In the chancel is a poignant wall tablet to Elizabeth White, wife of the vicar William White, who died in 1840. Above a simple inscription is a mournful figure dressed in Grecian robes.

One of the most intriguing historic features is a pair of painted panels from a medieval screen, now hung on the wall. A little piece of America

Visitors to the church may scratch their heads on seeing an American flag hanging from a flagstaff by the chancel arch. It is actually the third US flag to hang in All Saints church. The first was presented to the village by the 95th Bomber Group of the US Air Force in August 1945 in memory of their stay in the area during WWII. The flag was stolen in 1981 and replaced by the Commander of the USAF Base at Bentwaters.

That second flag suffered badly from deterioration and by 1991 was in poor condition. Unfortunately, by that time the US had added two new states (Hawaii and Alaska), and a copy of the original 48-star flag proved impossible to find. A local resident, Alan Macnee, made a replica of the 48-star flag, which has hung inside the church since 1992.

In the churchyard is a large memorial to the Fox family. The top of the memorial is made of copper, as are three sides, carved with inscriptions to members of the family, including Nathaniel Fox, who died in 1690.

Another interesting tomb is that of James Chambers, an 18th-century equivalent of a wandering minstrel. He lived as an itinerant pedlar and used his gift of creating acrostic verses based on people's names to make a living. His gravestone is carved with the symbol of a harp. 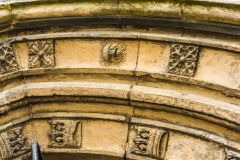 More self catering near Stradbroke, All Saints Church

More bed and breakfasts near Stradbroke, All Saints Church