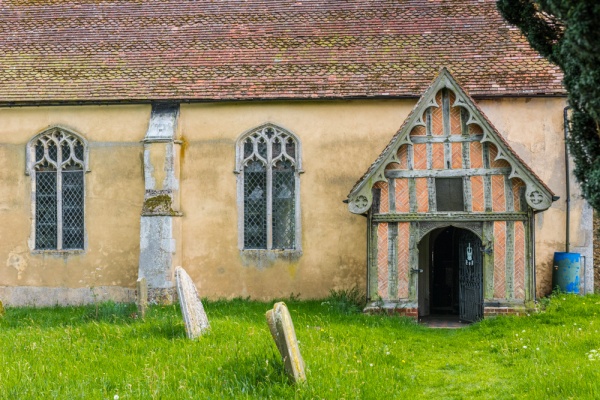 The small country church of Shimpling, near Diss, is located well away from the village it was meant to serve, and stands alone amidst farm fields and woods. 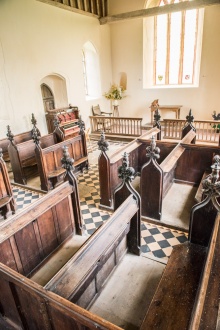 Looking east down the chancel

The church dates to the Norman period and boasts a very attractive round tower at the west end. Though the lower part of the tower is Norman, the upper stages are 15th century, and the peculiar short spire is a Victorian addition. The church is entered through an extremely attractive timber-framed porch, with red brick infill.

The chancel is 14th-century work, and there is a small 16th-century brass memorial plate set into the floor of the nave. It commemorates Anthony LeGrys, who died in 1598. The LeGrys brass is a palimpsest (that is, a brass that has been reused with an inscription on the reverse).

In this case, the oldest inscription is facing up. On the reverse is an inscription to Thomas LeGrys, presumably a descendant, who died in 1692. In the chancel floor is a ledger slab with a coat of arms for Cecil Potter, who also died in 1692.

The church interior was much restored in the 19th century, but the restoration left intact a small collection of medieval stained glass dating to as early as the 13th century.

There are fragments of 15th century painted glass in several windows, especially the south-west window of the nave, which depicts four angels playing musical instruments. The angels' faces were scratched away by iconoclasts during the Reformation. Look for the striking figure of a lion amid the glass fragments.

The 15th-century font is very nicely carved, the carvings on the stem, in particular, seem ready to jump right out of the stone! The font bowl is carved with symbols of the Evangelists alternating with angels holding instruments of The Passion. The shaft is decorated with figures of lions, and the bowl is supported on decorative angels. The ornate wooden cover is just part of a much larger piece of woodwork and may be as old as the font itself.

Look for the ancient parish chest, with a lid carved from a solid piece of oak. The chest has three locks, one for the priest and two for a pair of churchwardens. Between a set of benches near the door you will find a wooden trap door. Lift it to reveal a preserved section of original medieval floor tiles. The benches are 15th century, restored in the 1850s, with some good surviving bench end carvings.

On the church exterior look for a scratch dial carved into a buttress on the south wall.

Shimpling church is no longer in use for regular worship and is cared for by the Churches Conservation Trust. It is normally open daylight hours.

Note: there is also a Shimpling church in Suffolk - also dedicated to St George - so don't confuse the two! 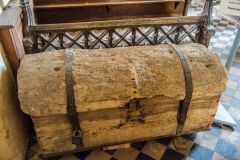 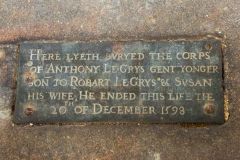 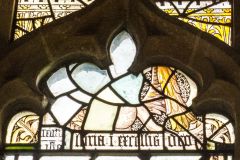