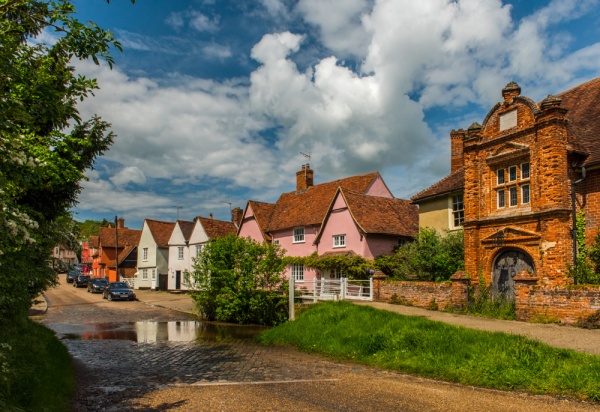 The ford in Kersey

Kersey is the quintessential picture-postcard village, and the view across the cobbled ford, up the main street lined with thatched and timber-framed cottages, to the medieval church that overlooks the village, is an iconic Suffolk sight, and one that you will always remember.

Kersey owes its wealth of historic buildings to its prosperity during the heyday of the Suffolk wool trade in the Middle Ages. Kersey was known for its coarse twill broadcloth, much of which was used for army greatcoats and uniforms. Many of the attractive cottages in the village were home to families of weavers.

Among the numerous medieval buildings is the Bell Inn, which has featured in several travelogue films. Several of the houses show medieval pargetting, or decorative plasterwork, a speciality of East Anglian houses. One has a plasterwork sun with the date 1334 set around it.

The parish church of St Mary is a fine example of a Suffolk 'wool church', a church well endowed by rich local merchants who had made good in the medieval wool trade. The south porch is a superb example of ornate flintwork design, and the interior boasts a medieval angel roof - though much damaged by zealous religious reformers during the Protestant Reformation. There are also several medieval wall paintings and a very fine painted rood screen.

Kersey is a delightful village, and though it can become extremely crowded at the height of summer, it well repays a short ramble to soak up the ambience and enjoy the traditional architecture.

Just west of Kersey is St James Chapel at Lindsey, a 13th-century thatched chapel now in the care of English Heritage. 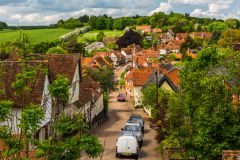 More self catering near Kersey >>

More bed and breakfasts near Kersey >>