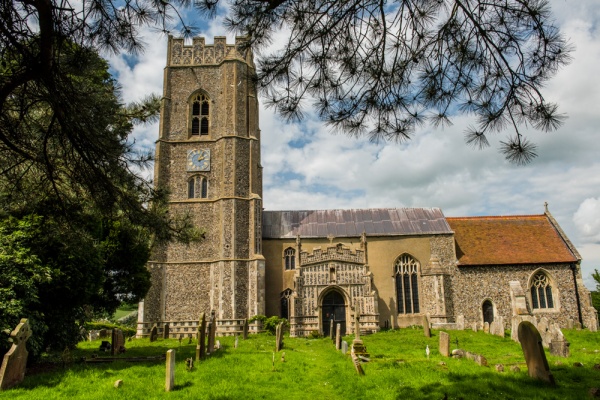 St Mary's church is a striking building of mixed flint and stone, standing on a small hill overlooking one of the prettiest villages in England. Kersey is the sort of place that tourist boards love, with a quiet main street crossing over a cobbled ford, and timber-framed cottages clustered about, as if they've grown there organically over the centuries.

Though Kersey gets more than its fair share of summer visitors, come at any other time and you will enjoy one of the most attractive little villages anywhere in Britain.

The church certainly adds to that ambience; St Mary's is an attractive 'wool church', erected and embellished over the years by Suffolk merchants grown rich on the proceeds of the wool trade. Most of the building is 14th-15th centuries.

Perhaps the best feature of St Mary's is the south porch, which must be one of the finest in Suffolk. Look up as you pass through the porch and you will see a wonderful coved ceiling with ornately moulded wooden beams dividing the area into separate panels.

As for the interior, the first thing you will notice is the angel roof. This is original 15th-century work, made of alternating tie beams and hammer beams joined by arched braces. The protruding angel carvings have been defaced, losing their heads at the Reformation, but the effect is still quite impressive. There is not one but two medieval fonts, one dating to the 12th century the other a relative newcomer from the 15th century.

One of the most appealing features is a painted chancel screen, whose bright colours suggest that it has been retouched at some point. This is somewhat oddly set against a wall. There are six painted panels on the screen; three of prophets, and three of kings.

There are several examples of medieval wall paintings throughout the church; the best of these is on the north aisle wall. In the nave is another large painted figure which may represent St George.

On the north wall is a worn niche which may have been associated with a medieval shrine to Our Lady. A group of bits and pieces of painted carvings are set within the niche, behind a protective piece of glass. There is also a partly-finished sedilia in the north aisle. One can imagine the stonemason laying down his tools at the end of a working day and never returning.

This is a wonderful church, full of interest, and all the more worth visiting for its setting in the pretty village of Kersey.