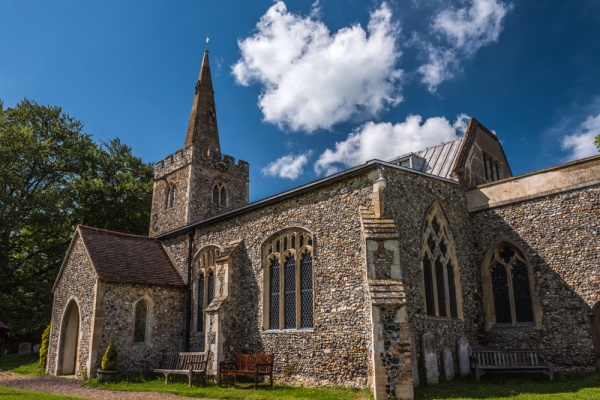 Polstead is the quintessential Suffolk village, a peaceful enclave of thatched cottages above a large pair of ponds where ducks swim placidly. On a hillside above the ponds, beside the 18th-century mansion of Polstead Hall, stands St Mary's church, essentially an early 12th-century building with 14th and 15th-century additions.

The history of the church goes back to at least the 7th century, when St Cedd preached here. Near the fence enclosing the churchyard (in the grounds of Polstead Hall) is the Gospel Oak, a descendent of a tree where Cedd is thought to have preached to the locals in AD 653. Once a year a service is held at the Gospel oak in memory of St Cedd and his mission.

In the mid-14th century the aisles were torn down and enlarged, the chancel roof raised, the west tower built, and a north porch added by the de Lambourne family, lords of the manor. Their heraldic shields are carved over the door, and the porch windows have medieval glass depicting the Gifts of the Magi, Judas Kiss, and April from the Labours of the Months. 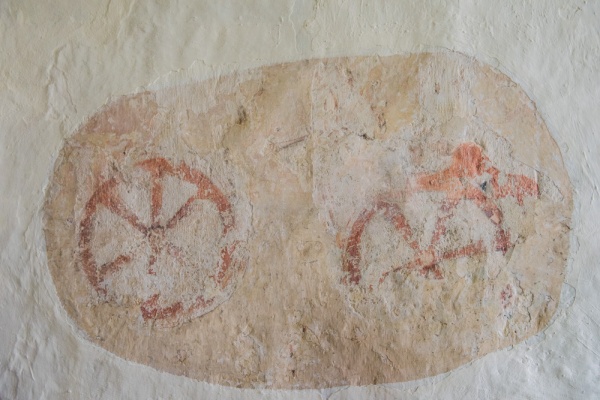 One very unusual feature is the stone spire, added in the 14th century. It is the only medieval stone spire in Suffolk. At the base of the tower is a brick arch, thought to have been the original entrance. You can get a very good view of this doorway and its narrow Romanesque arch from inside the nave.

The main entrance is through the 14th-century south porch, but the north doorway opposite retains its original medieval door and sanctuary knocker. Over the north door are the royal coat of arms to Charles I, and on the south aisle wall are funeral hatchments to local gentry.

The interior is fascinating, with several very unusual Norman arches made of brick. The bricks date to roughly 1160 and are considered the earliest English bricks in existence.

Throughout the church you can see traces of Roman bricks and blocks of tufa stone from a villa that stood beside the churchyard. 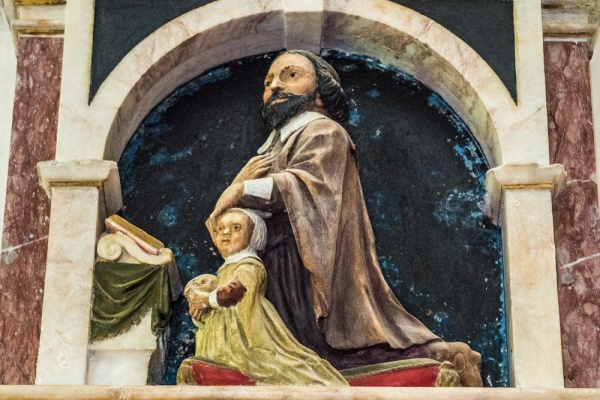 The font is a rather peculiar piece, made of a modern brick bowl set on 13th-century stone pillars. It is topped by an odd curvilinear cover designed by an Oxford nun in 1960 and meant to represent the flowing waters of the River Jordan. Behind the font are a pair of medieval wall paintings thought to represent the Wheel of Life.

At the west end of the nave is a 15th-century parish chest and on the north wall is a medieval wall painting of a bishop raising one hand in a gesture of blessing.

On the north wall of the nave are two fragmentary wall paintings flanking a blocked brick clerestory window. You can make out curved lines, probably representing folds of drapery or flowing robes.

The nave is filled with Victorian pews, decorated with poppyhead ends in the style of medieval benches. At the east end of the nave, the bench ends are carved with shields depicting coats of arms of the lords of the manor.

Over the east end of the north aisle is a painted ceiling, or canopy of honour, which would have stood over an early 16th-century chantry chapel.

On the north side of the chancel arch is a fascinating 17th-century wall monument to Jacob (sometimes called John) Brand of Polstead Hall, who died in 1630. Brand is shown kneeling, his hand resting on the head of his young son Benjamin, who holds in his hands a skull, symbolising an early death.

Benjamin is clad in a dress, or robe that we would now consider to be feminine, but in those days both boys and girls wore dresses when they were young. The pose of the father and son is very touching and reminds us how often children tended to die at an early age. Over the effigies of father and son is the wyvern, the Brand family symbol.

The south-west window of the chancel holds fragments of medieval glass, some pieces dating to the 14th century. There would have been much more beautiful glass were it not for the efforts of William Dowsing, the iconoclast who visited Polstead in 1643 and wrote in his journal that he destroyed 45 images.

The communion rails are 17th century, supported on twisted balusters, and the centre panel of the carved oak reredos appears to also be 17th century.

In the south aisle are panels of 18th-century box pews re-used as wall panelling.

In the churchyard is a war memorial based on the design of the Cenotaph in London. Also in the churchyard is the grave of Maria Marten, the victim of the infamous Red Barn Murder that captivated newspaper readers in 1828. Unfortunately, souvenir hunters chipped away her gravestone, piece by piece, until nothing was left. See our article on Moyses Hall Museum in Bury St Edmunds for more on this sensational murder case.

St Mary's is a stunning church, in an unforgettable countryside location. A sense of history lingers here, and the church is full of historic interest. The church is usually open to visitors and was open both times we visited. 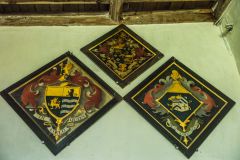 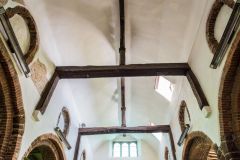 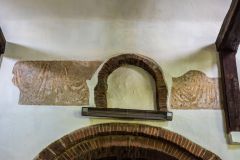 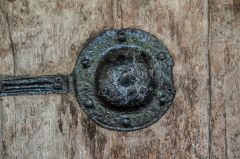 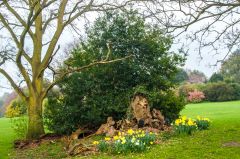 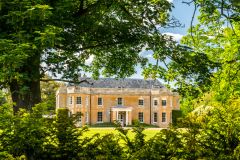