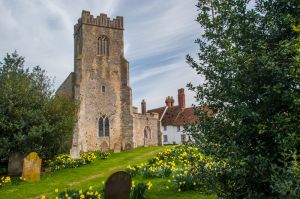 St Bartholomew's church in the small Suffolk village of Groton is an attractive flint building, dating mainly to the 15th century. The oldest part of the church is the base of the tower, which is likely 13th century. At first sight, St Bartholomew's might have you scratching your head; the parapetted nave is so high and box-like that the tower seems almost to disappear beside it.

The main feature of interest at Groton is its association with John Winthrop (d. 1649), whose grandfather was lord of the manor at Groton in 1618. Winthrop led the 1630 Puritan voyage to the New World, helped found the city of Boston, and became the first governor of Massachusetts. His parents lie buried in the church.

Inside the church is a lovely modern stained glass window in honour of Winthrop, funded by his American descendants. Heraldic shields with the Winthrop and Massachusetts coats of arms are displayed on another window inside the church.

Indeed, much of the church has been restored with funds donated by American Winthrops and their friends. For that reason the interior lacks some of the historic interest found in many medieval churches in this area of Suffolk, though it is, it must be said, in a generally good state of repair thanks to the American donations!

In 2015 the US Ambassador to the UK, Matthew Winthrop Barzun, visited Groton. Ambassador Winthrop is a direct descendant of John Winthrop.

In the churchyard stands the oldest outdoor memorial in Suffolk; the Kedbye tomb, dated 1598. A more modern memorial is that of crime novelist Baroness Ruth Rendell, one of Britain's best-selling authors. Baroness Rendell's ashes were interred in Groton churchyard beside her husband Don in 2015. The couple had lived in Groton for many years.

In 2013 the church was in the news after it was revealed that thieves had stolen sheets of lead from the church roof. Thankfully the church was able to get a grant to help defray the cost of replacing the lead.

St Bartholomew's is normally open daylight hours and was open when we visited. 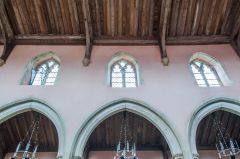