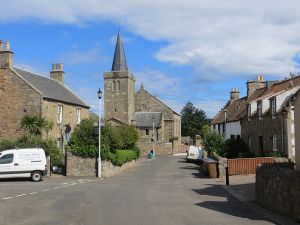 Kilrenny
Kilrenny is a small village near the eastern end of the East Neuk of Fife. Unlike most East Neuk villages, Kilrenny is set back from the coast. The history of Kilrenny dates to at least the 9th century when St Ethernan established a chapel here.

This early chapel was followed by a 13th-century church, which lasted until a new church was built in 1808. Near the church tower is the tomb of the Lumisdaines family. One of the family, Sir James Lumisdaines, fought with King Gustavus Adolphus of Sweden.

While we know the location of the Lumisdaines memorial, there is a still more famous resting place in Kilrenny which remains a secret. When Cardinal David Beaton was murdered in 1546, he was buried in a hidden location near Kilrenny church to avoid desecration by his enemies. The location of the tomb is unknown to this day.

Kilrenny fishermen used to store their nets at the harbour of Cellardyke, which was originally known as Nether Kilrenny for that reason.

In a field on the western edge of the village is the Skeith Stone, an intriguing carved stone which may be Pictish. It bears an incised double-ringed wheel design, similar to a design found in Shetland.

More self catering near Kilrenny >>

More bed and breakfasts near Kilrenny >>