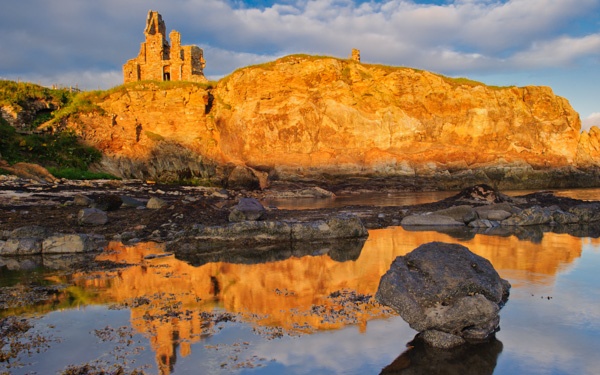 To the best of my knowledge, there are three Newark Castles in Britain. One, not surprisingly, is in Newark on Trent, Nottinghamshire. Another, also quite well-known, is just outside Glasgow. The third, almost forgotten, stands on a lonely clifftop about a mile from the village of St Monans, on the south coast of Fife, looking out over the Firth of Forth.

The location is utterly superb; the castle ruins occupy most of a small promontory jutting out into the sea, with almost sheer cliffs on three sides. The impact of the view is somewhat lessened by the fact that a modern caravan park is located just inland from the promontory, but it still looks fabulous! The promontory is enclosed by a wall to the south and along the cliff to the west.

We do not know exactly when the castle at Newark was begun; the most likely date is during the 15th century when ranges of buildings were erected around a courtyard.  However, the site was in use as far back as the 13th century, when King Alexander III is thought to have spent part of his childhood here. 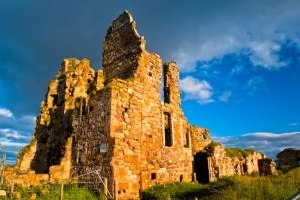 The oldest part of the ruins are three vaulted cellars on the south side of the east range. In the early 16th century, the main castle block was extended and a circular tower added at the north-east corner. This has now partly collapsed.

Late in the 16th century, a new hall was built at ground floor level, between the cellars and the tower. Further alterations took place in the late 16th century and in the 17th century, a storey was added atop the tower, and another to the 16th-century house, which was altered with Dutch gable ends.

You would never guess to see it today, but the castle was in use as a dwelling until well into the 19th century, when the walls of the tower were cut away to provide extra living space. Unfortunately, this led to the collapse of the tower, while at the same time the crumbling cliffs swept other auxiliary buildings into the sea. The entire west range of the castle seems to have suffered this fate.

We actually know a fair bit about the castle construction, thanks to an archaeological survey undertaken to see if it was possible to restore the structure. The tower stood five storeys high, with a basement level below ground. It was 7.5 metres diameter with walls over 2.2 metres thick at ground level, tapering in thickness towards the top. There were gun loops on the east and west walls.

A kitchen was inserted into one of the undercroft chambers of the east range. The floor was bedrock, though a token effort to install paving was made. A narrow channel was cut into the bedrock to allow kitchen slop to flow to a drain in the east wall.

A first-floor hall was surveyed, probably belonging to the 17th-century phase of construction. This was directly above the kitchen, and had two fireplaces; a small one in the south wall, and a larger one directly over the kitchen fireplace.

Newark Castle has been known by a bewildering variety of names over the centuries, including Inverie, St Monans, and St Monance. 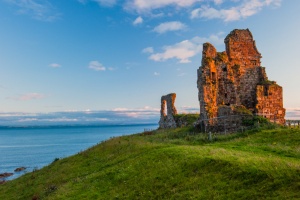 In the medieval period, the castle was owned by the Kinloch family, who appear to have built an extensive house with a courtyard on the seaward side. The house consisted of a hall and solars over three vaulted cellars.

By the mid-16th century, Newark was owned by Sir James Sandilands of Cruivie, and the Sandilands extended the castle with a pair of rooms over a kitchen. The Sandilands fell on hard times and were forced to sell Newark to General David Leslie in 1649.

General Leslie is known as the victor of the Battle of Philiphaugh in 1645 when he defeated the rebellious Earl of Montrose.

A less glorious moment in his military career came in 1651 when he served as Lt. General of Horse at the Battle of Worcester. In that battle he was criticised for his conduct; reports said he was 'running up and down as a man amazed'.

Rather than being censured, Charles II named Leslie 1st Lord Newark in 1661. Scottish wags said that he should have lost his head for his 'Auld Wark' (old work) rather than being rewarded with 'Newark'.

Leslie was buried in St Monans church, but when the church was undergoing repairs in 1828 his bones were accidentally tossed into the sea. I would imagine his relations had a word or two to say about that!

In 1898 a rich Glasgow shipping merchant named Sir William Burrell considered rebuilding Newark Castle. He called in leading architect Sir Robert Lorimer to draw up plans for a complete restoration. In the end, Burrell decided against the project, but consider ... he ended up giving the Burrell Collection to the nation, Scotland's greatest private collection of art. It might have ended up here at Newark!

The castle is directly on the Fife Coastal Path. The easiest way to reach it is to park at the Old Kirk parking area in St Monans and take the coastal path from the kirkyard. The trail runs along the top of the cliffs, past a lovely 16th-century doocot, to the castle.

The site is open, but the cliffs are very steep, so please take care! There are signs warning of loose masonry - please heed them! The castle is definitely in poor condition and may be best appreciated from a distance, or as part of a lovely coastal walk. 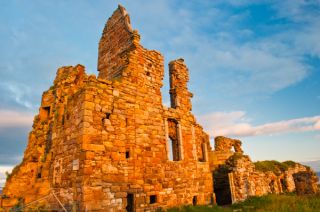 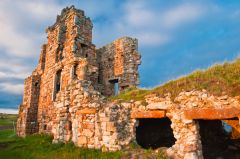 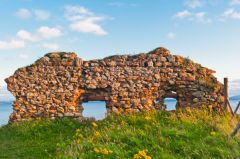 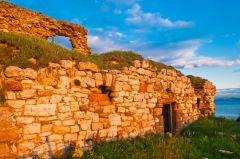 More self catering near Newark Castle