HERITAGE HIGHLIGHTS:   One of the oldest churches in Scotland still in use 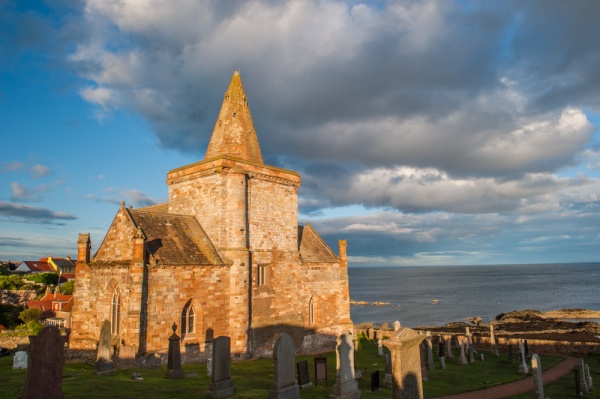 The village of St Monans takes its name from Monan, a 9th-century hermit who built a cell near the point where a burn ran down to the sea, on the south coast of Fife. Monan was killed by Vikings, and a shrine built in his honour. Another version of the story says that Monan was an Irish bishop named Moinenn, and his relics were brought to Fife by Irish monks. Yet another version says that Monan is a Gaelic form of Ninian, after St Ninian of Whithorn, who was active in Fife around AD 400. 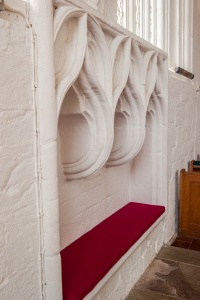 Whatever his origins, people settled near the site of Monan's cell, and pilgrims came to his shrine. A rough chapel was founded in the saint's honour.

Then around AD 1265 a sturdy stone church was built, or rebuilt, depending on which source you believe. The church was rebuilt a century later by King David II, to give thanks for his delivery from a storm.

One version of the story says that the king was crossing the Firth of Forth when his ship was caught in a violent storm. The king prayed to St Monan for delivery, and when his prayers were answered he established a church near the saint's shrine on the cliffs.

Another version of the story says that it was not David II but David I (1085-1153) who was responsible for building the first chapel at St Monans. according to this version of the tale the king had been wounded by an arrow in a battle with the English. The monks of St Monans healed the king of his wounds, and in gratitude, he built them a chapel.

It is entirely possible that both stories are true; that David I began the chapel and David II enlarged it. 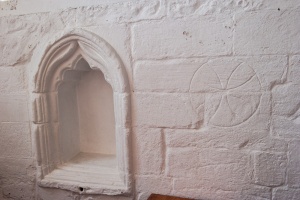 The chapel, which later became the parish church, was built within 20 metres of the high cliffs at St Monans. It is often claimed the Auld Kirk is built nearer the sea than any other church in Scotland, and it is easy to believe it when you see how close the building is to the cliff's edge.

The church may never have been finished, for it lacks a nave. It is built to a cruciform plan, with a choir and transepts, with a striking spire above the crossing.

The most interesting features of the church interior are the beautiful vaulting on the choir ceiling. The vaulting boasts lovely painted bosses at the intersections, depicting heraldic designs. The coats of arms include those of the Earl of Douglas, the Earl of Fife, and the Earl of Annandale. The Royal Arms of Scotland is set above the original site of the altar.

There is also a wonderfully carved 14th-century sedilia, or seat for clergy.

The oldest part of the church is the stonework and windows in the south aisle. An aumbry (inset cupboard) and a piscina mark the site of a medieval altar which stood where the present doorway is. Behind the pulpit is the arch of the original west door, now blocked, and you can see the channel in the stones for the door bar. 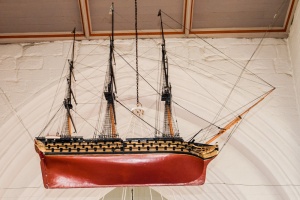 18th century model of a ship

The interior is whitewashed throughout, giving it a spacious, light aura. Despite the whitewash, you can easily make out consecration symbols in the form of Celtic crosses. There is a particularly fine consecration cross near the 14th-century piscina in the chancel.

In 1471 King James III gave the kirk to a small monastery of Dominican friars founded beside the site. In 1544 the chapel was burned in an English naval attack on the Fife coast. The chapel was converted into the parish church in 1646, when the transepts were blocked off and fell out of use. A wooden gallery was inserted in 1796, then removed again when the entire church was restored by William Burn in 1826. Burn also opened up the transepts again, giving the church back its original layout. He also lowered the floor by 4 feet, and added the distinctive buttresses on the church exterior.

One thing that all visitors remark on is the 18th-century model of a ship suspended from the ceiling. It is a reminder of the strong links between the people of Fife and the sea. The model was given to the church in 1800 by Captain Marr of the Royal Navy, who was born in the village. In the north transept is a memorial to Henry Anstruther (d.1858), which appears to incorporate the frame of a medieval brass.

The Auld Kirk is open daily from Easter through October, and there is a free parking area immediately beside the churchyard. 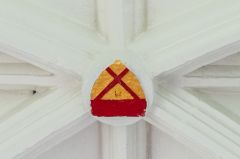 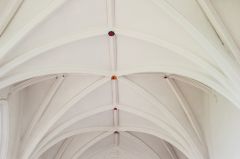 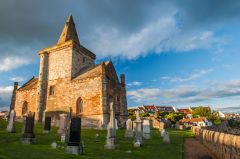