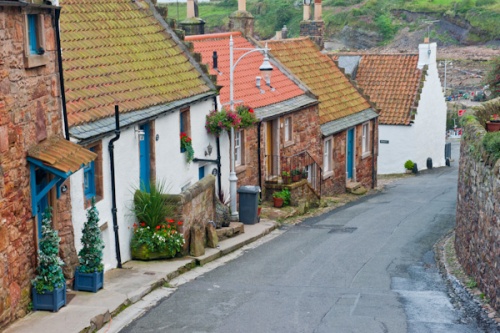 A picturesque lane in Crail

Crail is the most easterly of the old fishing towns along the south coast of the East Neuk of Fife. It is also the oldest Royal Burgh in East Neuk, with a charter dating to the 12th century. In 1310 Robert the Bruce granted Crail the right to hold a weekly market. This market was held on the wide Marketgate, and its location is marked by the slender 17th century Mercat Cross topped by a carving of a unicorn.

Near the Mercat Cross is the 16th century Tolbooth, with council chambers on the top floor and gaol cells below. Atop the Tolbooth is a weathervane shaped like a fish; a reminder of the Crail capon, a dried haddock delicacy that made Crail famous.

Beside the Tolbooth is the early 19th-century town hall and the Crail Museum, which has displays ranging from local seafaring, smuggling, and golf, to the intriguing history of the local air station, HMS Jackdaw, and its role in training linguists for service during the Cold War.

Further along Marketgate from the Tolbooth and museum is the old kirk of St Mary's. Outside the church gates lies a large boulder called the Blue Stane. This is traditionally said to have been thrown by the devil from the Isle of May. A circular depression on the surface of the Blue Stane is said to be the mark of the devil's thumb.

There has been a church here since at least the 12th century, which makes it one of the oldest places of religion in Scotland in continuous use. John Knox preached here in 1559.

Within the church, set against the west wall inside the south door, is a beautifully carved 9th-century Celtic cross-slab. This once lay on the path to the church and has obviously suffered from the passage of many feet over the centuries, but it remains an interesting example of early Christian art. 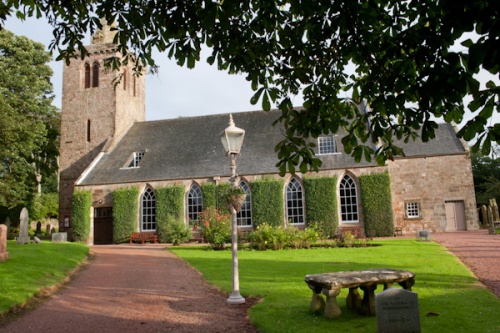 In the churchyard is a mort house, an early 19th-century building erected to house the remains of recently deceased people during the height of the body-snatching era. Since a decayed body was of no use to body snatchers, freshly deceased corpses were left to rot in the mort house for 3 months in winter and several weeks in summer, before they were properly buried in the churchyard.

From the church, a short walk leads to the restored Priory Doocot, shaped like a whitewashed beehive. From there you can walk along the cliffs to the harbour, past the site of a castle established by King David I. The castle fell into ruin by the 16th century and was eventually replaced by the current castle, a private residence. From the castle walk, cobbled lanes lead down to the picturesque harbour.

There are two main breakwaters; the curving pier which dates to the 16th century, and the straight West Pier of 1826. There are numerous attractive cottages around the harbour area, several of them boasting centuries-old marriage lintels, bearing the initials of newly married couples and the date of their marriage. The most imposing building by the harbour, however, is the white Customs House, which dates to the 1690s.

A short stroll from the High Street up St Andrews Road brings you to Victoria Gardens, a small public park. In the park is an intriguing carved cross-slab, called the Sauchope Stone, or the Standing Stone of Sauchope. This is thought to be Pictish, and date to the 9th century. It originally stood on the Fife Ness road but was removed to the park in 1929. The stone is now covered in lichen, and the carvings are rather difficult to distinguish.

We had the pleasure of staying in Crail for a week, and thoroughly enjoyed the experience - despite the rather dismal weather during our stay! Crail is a delight, with a picturesque old harbour, winding lanes, and a variety of interesting older buildings.

We loved the walk along the shore, past the doocot, then past the site of David I's castle, to the lovely cottages around the old cobbled harbour front. I can highly recommend Crail as a centre for exploring east Fife; its the sort of place you can easily find yourself coming back to again and again.

More self catering near Crail >>

More bed and breakfasts near Crail >> 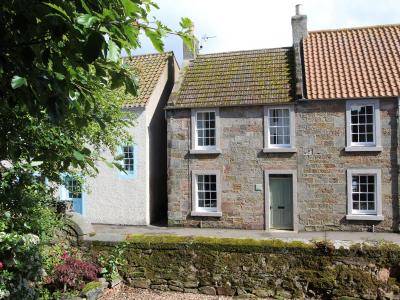 This semi-detached cottage lies in the town of Crail and can sleep four people in two bedrooms.
Sleeps 4 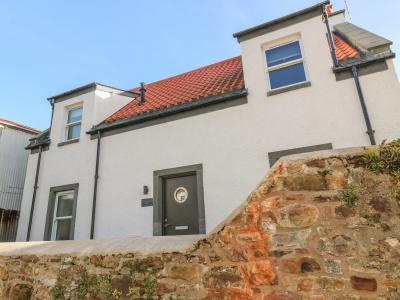 This detached cottage is based in Crail, Scotland and can sleep five people in two bedrooms.
Sleeps 5