HERITAGE HIGHLIGHTS:   The superb Norman church of St Athernase with its unusual tower 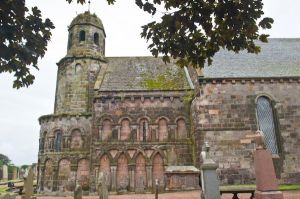 Leuchars Norman church
St Athernase church in Leuchars has been called the second most important Norman building in Britain, a testament to the impressive architecture of this striking 12th-century church. It is certainly one of the most exciting Norman buildings in Scotland.

The first church here was constructed in 1183, and in 1244 the church was dedicated to Athernase by Bishop de Bernham of St Andrews. The church has undergone many alterations over the centuries, most obviously the striking stone bell tower, built in 1745.

By the south door are memorials to the Bruce family of Earlshall, including one to Sir William Bruce, founder of Earlshall, who fought at Flodden. Near the pulpit is a memorial to Robert Carnegie of Kinnaird, who served as an ambassador to both Mary of Guise and her daughter, Mary, Queen of Scots.

Leuchars is today best known for its annual Battle of Britain air festival; a reminder of the importance of the nearby RAF Leuchars airbase. The RAF base played an important part in British aviation history. In 1911 Royal Engineers at Leuchars experimented with the use of balloons. In 1920 the Royal Navy established an RAF base here.

There is more to Leuchars history than the RAF airbase, however. In the 12th century, a Norman knight named Robert de Quincy built a castle at Leuchars. The castle was essentially a wooden stockade, but it was later rebuilt in stone. The stone castle was then destroyed in the 18th century, and little evidence now remains.

More self catering near Leuchars >>

More bed and breakfasts near Leuchars >>