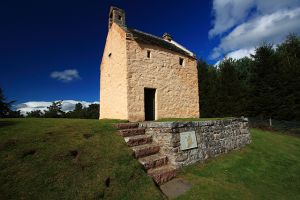 An unusual detached, fortified bell tower, built in 1655 to serve the parish church of Ardclach. The tower stands on a hillock at the north-west corner of Ardclach, while the church it was built to serve is down in a loop of the River Findhorn several hundred yards away.

This small tower was probably erected by Alexander Brodie of Lethan. Brodie supported the Covenanters, which led to his lands being attacked on several occasions, once by the Marquis of Montrose in person. The Battle Auldearn took place near here on 9 May 1645, when Montrose defeated a force of Covenanters.

Given this background, it is perhaps not surprising that Brodie thought it wise to erect a watchtower high on a hill, where a watcher could see advancing enemies from a great distance.

The tower was not at first a bell tower, though that is how it is best known today. The belfry was a later addition, used to summon worshippers to the parish church in the valley below.

At first glance, the tower seems like a doocot, perched high on a wooded hillside. It is small, only 14 feet square, with a rendered exterior and a small belfry at one gable. There is a very small, windowless chamber on the ground floor, and a narrow set of stairs climbing to an equally small chamber on the first floor. This upper chamber at least has a pair of small windows to admit some measure of light.

The lower chamber is unlit; even with the outer door of the tower is flung wide, it is hard to see into the dimness of this chamber. If it was indeed used as a dungeon, it must have been a dreadfully cheerless place to be imprisoned. By contrast, the upper chamber seems almost welcoming! There is a small fireplace on one side, with a carved lintel bearing the initials of Brodie's second wife, Margaret.

It takes some determination to reach Ardclach; I would not be at all surprised to learn that this is one of Historic Scotland's least visited properties. Yet those who do take the time to find the tower will be rewarded by an intriguing structure in a fabulous scenic location.

At the foot of the path that leads up to the bell tower is a simple memorial to Rev Donald Mitchell. Mitchell (1792-1823) was the son of the minister at Ardclach. He began a career in the army but then became Scotland's first missionary to India.

He died of a fever within a year of arriving on the sub-continent and is buried at Poladhpur, where the Mission to Lepers maintains a mission to this day. The memorial at Ardclach is a copy of the original that marks his grave and was erected in 1961 by public subscription.

Historic Cawdor Castle is about eight miles away. 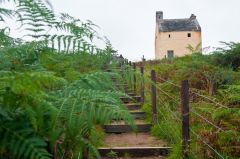 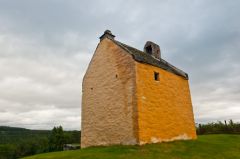 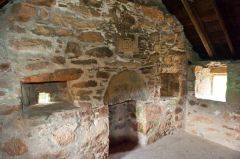 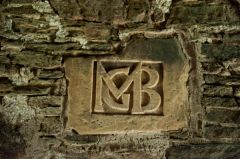 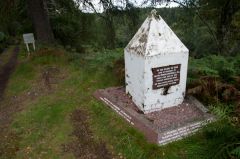 Nearby accommodation is calculated 'as the crow flies' from Ardclach Bell Tower. 'Nearest' may involve a long drive up and down glens or, if you are near the coast, may include a ferry ride! Please check the property map to make sure the location is right for you.