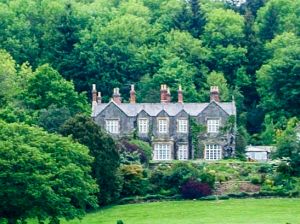 Bodynfoel Hall
Bodynfoel is an early Victorian mansion in Tudor Gothic style, with small formal grounds, including a park and woodlands. Open on special garden day openings for charity.
Bodynfoel Hall was built in 1846 by the Bonner-Maurice family. Beside the mansion is a formal garden, while further away is a semi-natural area of woodland and parkland. The garden was restored in the 1980s when two small lakes were added.

The gardens and woodland combined cover roughly 1/2 acre, with a mix of mature trees and newly planted trees, shrub roses, and a heather bank. The garden was begun around 1830, before the current house. There are woodland walks, and paths around 3 ponds.

The garden is usually open by appointment from May-October, and also opens yearly under the National Garden Scheme. Follow NGS signs from Llanfechain.

More self catering near Bodynfoel Hall >>