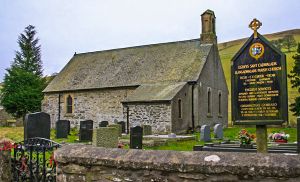 Llangadwaladr, St Cadwaladr's Church
The medieval church of St Cadwaladr stands inside an ancient enclosure. The first written record of a church here comes from 1291, when the chapel of 'Bettws Kadwaladr' was mentioned as belonging to Llanrhaiadr church.
Most of the current building is 15th century, with extensive rebuilding in the Victorian period. There is a small bellcote at the west end, a polygonal apse, south porch, and north vestry. Leaning against the east wall are a pair of late 18th century gravestones. Under the east window is a date stone carved with 1883.

One survivor of the restoration is a medieval window reset in the vestry wall. Parts of the nave and chancel also survive from the medieval building, and the timber roof in the nave is probably 15th century. The glass is 19th century, as are the pulpit and pews.

The most famous cleric to serve St Cadwaladr's church was Rev. Robert Williams (1810–1881), who wrote the Lexicon Cornu-Britannicum, the first example of a Cornish-English dictionary.

Don't confuse this church of St Cadwaladr with the church of the same name on Anglesey!