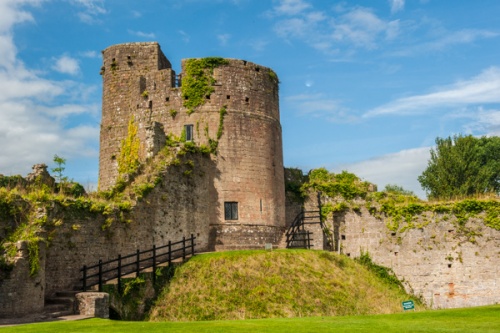 More than one castle calls Caldicot home. The earliest, now lost, was erected in Saxon times. On the site of that earlier fortress the Normans erected a motte and bailey castle in 1086. Henry de Bohun, Earl of Hereford, built a stone keep atop the motte in 1221, and added a curtain wall and two corner towers. Later, a two-story gatehouse with portcullis entry was erected. The Bohun family held the castle until 1373.

What makes Caldicot unique is the unusual semi-circular tower to the west of the keep. This tower houses a dungeon in the cellars, and a chamber on the top floor, but nothing in between save solid masonry! The keep is four storeys high, with fireplaces at each level, and stairs built into the thickness of the wall to move from one level to the next. A curtain wall surrounds the site and is linked to the great hall.

After the male Bohun line died out in 1373 Caldicot passed by mariage to Thomas Woodstock, the youngest son of Edward III. Woodstock and his wife Eleanor (nee Bohun) poured money into the castle, turning it from a defensive fortress into a sumptuous residence worthy of their status. 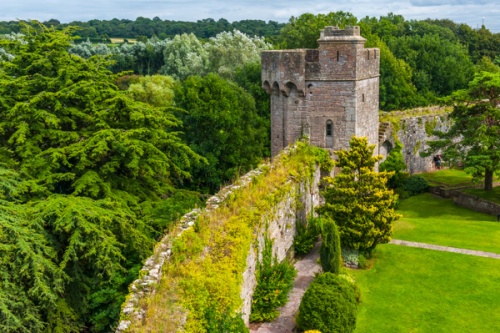 Looking along the battlements

Among the improvements was the great gatehouse in the south wall. The improvements at Caldicot were brought to an end in 1397 when Woodstock was murdered for opposing the marriage of Richard II to Isabelle of Valois. The castle eventually passed to the dukes of Buckingham and then to the Duchy of Lancaster.

The castle was eventually purchased by the antiquarian JR Cobb in 1855. Cobb restored Caldicot to its medieval grandeur, and today it is one of Wales' heritage treasures. The buildings sit in the midst of 55 acres of landscaped parkland, and visitors can enjoy a regular programme of medieval banquet evenings. 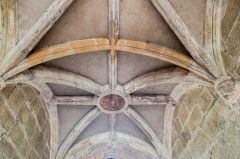 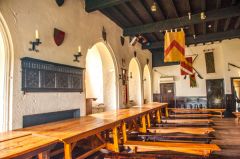 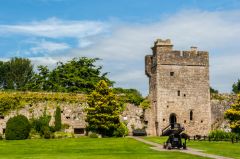 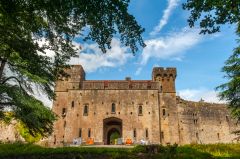 More self catering near Caldicot Castle >>