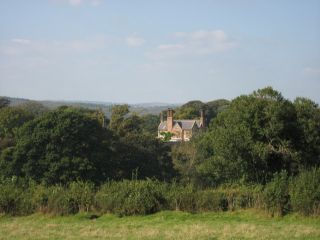 Garthgynan is a 17th century house of brick, enlarged in the 18th century and partially encased in stone. The most notable feature are three large clusters of ribbed chimneys made of brick. It dates to around 1651 and may have been built for William Wynn, Sheriff of Denbigh at that time. It later passed to the William family of Llanforda.

The garden and grounds layout was meant to be a statement of family status, to show the gentry status of the Wynn family. To the south side of the house is a small walled garden, enclosed within a late 16th century wall of stone and brick. While the garden was laid out in the late 16th or early 17th century the pavilion and terrace date to around the time the house was rebuilt n the mid-17th century. Set into the garden walls are 31 boles, or niches for housing bees.

In the south-west corner of the garden is a banqueting house, joined by a turf terrace to the ruins of another early garden structure. In the centre of the garden is a small pond, surrounded by a mx of lawn and beds holding flower and vegetables. There are shrub borders on the west wall and gravel paths around the perimeter and in a cross-pattern through the centre.

Outside the pleasure ground are narrow terraces planted with old fruit trees. At the base of the orchard is what remains of a rectangular pond, and just beyond this is the Dwr Ial stream. Another pond shaped like a canal lies to the south.

Garthgynan was used by novelist Stanley Weyman as the model for Squire Griffin's home of Garth, in his novel Ovington's Bank.

The house and garden are both listed Grade II* for historic interest, due to the fact that the house retains so much of its original historic architecture detail, and is set within a group of a well-preserved landscape of agricultural buildings and gardens.

We've been informed that Garthgynan is now a private house and is not normally open to the public. However, a public footpath runs directly through the property, making it very easy to see the house and grounds. The footpath can be joined from the minor road heading east out of Llanfair Dyffryn Clwyd at SJ137555, or off the B5429 east of the house, near Melin Garth-Gynan (SJ143551).

More self catering near Garthgynan Garden >>