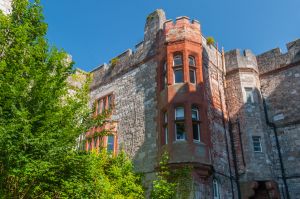 Ruthin (not to be confused with Rhuddlan, also in Clwyd) is a late 13th century castle built during Edward I's first campaign against the Welsh. The site may have been used by an earlier Welsh castle, possibly a residence of Llewelyn the Great. If so, that earlier castle was partly incorporated into Edward's new fortifications.
When Edward successfully pushed Llewelyn ap Gruffudd back beyond the River Conwy in 1277 he rewarded Lleweln's brother, Dafydd ap Gruffudd, for his support by granting him the lordship of the region. Dafydd rebelled in 1282, and Edward seized Ruthin, which he granted to Reginal de Grey. De Grey built a huge stone castle with an attached borough, aided by the king's own master mason, Master James of St George.

A descendent of de Grey, also named Reginald, provided the spark for Owain Glyndwr's early 15th century rebellion against the English crown. De Grey and Glyndwr clashed in a minor dispute over neighbouring estates they owned near the Welsh border. The dispute escalated out of control and Glyndwr's complaint against de Grey became a general rebellion against English control in Wales. Glyndwr was proclaimed Prince of Wales, and on 16 September 1400 he attacked Ruthin and burned the town. The castle survived the attack, but in 1402 de Grey was captured and imprisoned at Dolwyddelan Castle. He was only freed after a ransom of 10,000 marks was paid. 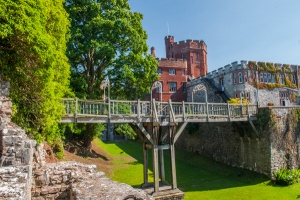 The dry moat and lower bailey

In 1646 the castle was garrisoned by royalist troops, but Parliamentary soldiers commanded by Thomas Myddleton captured the castle and pulled down much of the stonework. As a result, Ruthin became little more than a ruin, like so many other minor Welsh castles after the Civil War. The Myddleton-West family purchased the castle, and in 1826 built a mansion in the lower bailey. This was rebuilt in mock-Gothic style in 1849. This mansion is now the Ruthin Castle hotel.

The castle ruins consist of an upper and lower bailey. The upper bailey contains ruins of a hall, and is surrounded by partial stone walls with a twin-towered gatehouse. Little of the towers remain beyond vaulted cellars. The lower bailey has a section of wall with three towers, reached by a dry moat.

The castle, privately owned, is operated as a luxury hotel and event venue. You can book accommodation there, in fact, through our Castle Hotels in Wales section. 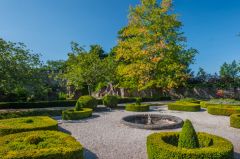 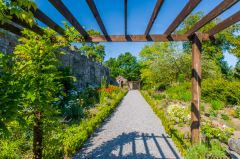 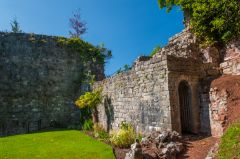 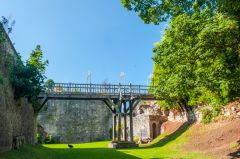 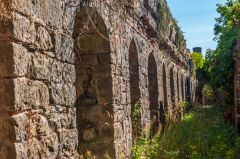 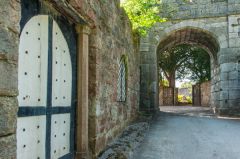 More self catering near Ruthin Castle >> 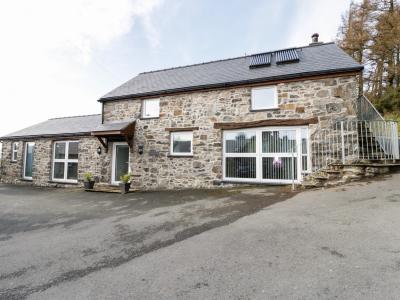 This converted farm building sits near the village of Pwllglas in Denbighshire, sleeping two people in one bedroom.
Sleeps 2 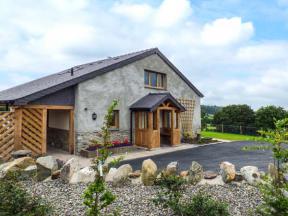