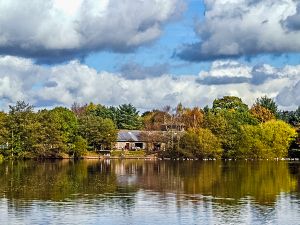 Gnoll Estate Country Park
The Gnoll Estate hosts an important early 18th century landscaped garden featuring cascades, lakes, follies, a grotto, and a pair of ruined historic houses.
History
The earliest written records of the Gnoll estate date to the 16th century, when the Earls of Pembroke were granted the estate by Elizabeth I. But it is the Evans family that really put Gnoll on the map. Evan Yr Halen made the family fortune in the salt trade (his name translates as 'Evan the Salt') and his grandson David Evans rented Gnoll from the Earl for 20 pounds annual rent. In 1658 the Evans family purchased the estate outright and built the first mansion here.

The estate passed by marriage to Sir Humphrey Mackworth, who made the Gnoll estate the centrepiece of an industrial empire, milling and manufacturing brass and iron goods including kettles. The success of Mackworth's industrial ventures enabled him to enlarge the mansion and lay out a formal garden near the house.

It is really Sir Humphrey's son Herbert who extended the house again, and from 1730 began to lay out the grounds as a landscape garden. Mackworth created sweeping viewpoints and built a series of formal cascades. Over the next few decades the grounds were embellished with classical features including a grotto, gatehouse, and a castellated temple.

Unfortunately, the golden age of Gnoll and its gardens was not to last. The estate passed through several hands until the Neath Borough Council took over the site in 1923. Gnoll House was used as a health clinic, and during World War Two ARP personnel were trained there. After the war the house fell into serious decline and had to be pulled down in 1957. The gardens, however were restored and turned into a country park.

What to See
Many of the 18th century landscape features have been restored, including 4 duck ponds, and a pair of cascades. The cascades are the earliest part of the landscape gardens, created around 1730 by Sir Humphrey Mackworth. At the top of the cascades is a Grotto, with a floor made from cockle shells and limestone in the shape of stalagmites. The ceiling was walls were originally decorated with shells, many brought from the West Indies, but these have now been lost.

Visitors can also explore the ruins of Gnoll House, including a ha-ha, icehouse, circular bowling green, and formal gardens.

The Ivy Tower
The Ivy Tower was built in 1795 by Mary Mackworth as a viewing platform for the Mosshouse cascades and the valley and town of Neath. The ground floor was used as a residence for a caretaker, while the first floor became a banqueting room and dance floor. The Tower was damaged by fire in 1920 and now only the outer shell remains. Due to its hilltop location the Tower is still one of the most easily recognisable landmarks for visitors travelling through the Vale of Neath.

In case you need any extra motivation to visit, the Gnoll country park was voted te best picnic spot in Wales in 2010.