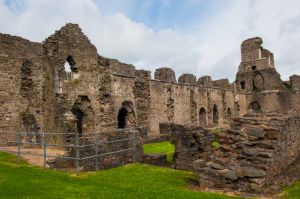 Founded in 1129 by Sir Richard de Granville for Savigniac monks from Normandy. The first Savigniac monks settled here in 1130, but in 1147 their order merged with the Cistercians, and Neath was developed along typical Cistercian lines. The abbey became quite wealthy, with estates in the West Country and throughout Glamorgan. The abbey expanded greatly in the 13th and 14th centuries, with a major rebuilding of the church over the years 1280-1330.

Neath was badly damaged during the Welsh rebellions against the Normans during the 13th century, but survived until it was dissolved by Henry VII in 1539.

After the Dissolution of the Monasteries the property was granted to Sir Richard Williams, and it was he, or his son, who created a large Tudor mansion over part of the cloister range. The house later came into the ownership of Sir John Herbert, but it fell out of use in the later 17th century.

Tudor historian John Leland once famously called Neath "the fairest abbey in all Wales", though he saw the site before parts of it was used for copper smelting in the early 18th century. Eventually Neath was completely abandoned and the buildings left to decay. 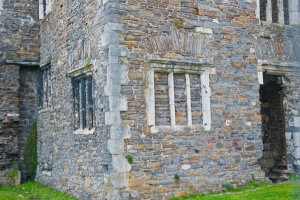 Neath is especially notable for its collection of earthenware floor tiles (some of which now grace the National Museum of Wales). Look for the tiles depicting the famous single combat between Richard the Lionheart and Saladin.

The best surviving part of the abbey church is perhaps the night stair, which led sleepy monks from their dormitory to the church for prayers. Above the stair is a wonderfully carved human head, but much of the original stonework elsewhere has been lost.

When we visited the Tudor mansion had been affected badly by Spring rain, which had the effect of making some of the stonework unsafe. as a result we could only view the mansion from behind fences. We were able to wander the rest of the site, however, and hopefully the photos with this article will convey some sense of the abbey.

Neath Abbey seems to be located in or on the edge of a suburb. It shouldn't be. It should be in the middle of a cold moor with perpetually grey weather. The original entrance is a veritable tunnel. It would be quite gothic, were it not surrounded by green grass and surveiled by a bright sun.

Perhaps the surroundings once suited it more. The Cistercian order tended to build isolated monasteries, withdraw from society more than other monastic orders, and opt for farming rather than pilgrimage as a revenue source. Here, apparently, they were quite successful until the Dissolution. The church once had arcades, hints of which can still be seen.

The walls were at least a hundred feet high, and we can assume the tower was taller still. The gatehouse is solid and thick, making a dark tunnel of the entrance. Some detailed stonework has survived, like the simple but smooth stone rail on the night stairs. But detail aside, it must have been imposing. Large parts of the walls lie scattered around the foundations, as if they were knocked down rather than allowed to crumble.

Like many monasteries, Neath Abbey was converted for private use. A corner of it, at least. A partially roofed manor takes up a quarter of the abbey's footprint. It too has crumbled, and soon after its construction, judging by the Tudor design. Sadly, there is little information available on site. The ruins hint at a lot of history and personal stories, but a hint is all you get. 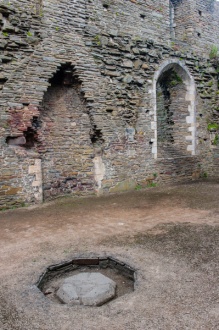 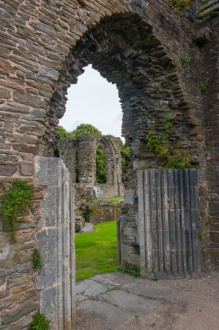 Archway to the abbey church 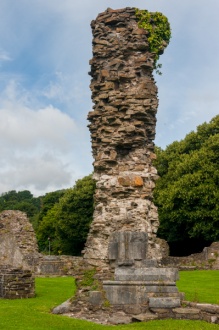 Ruins of the abbey church 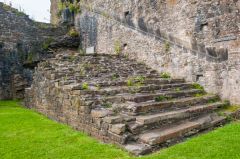 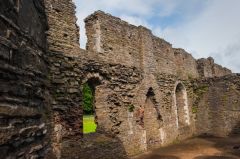 More self catering near Neath Abbey >>