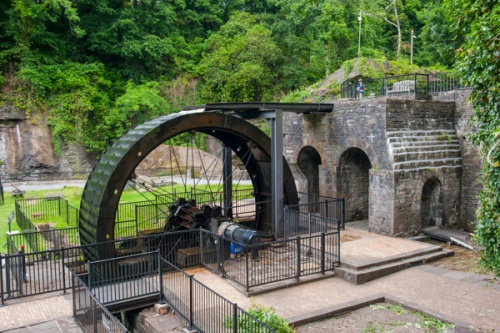 The water wheel at Aberdulais

An extraordinary site combining over 400 years of industrial heritage with one of the most beautiful waterfalls in south Wales, Aberdulais has been used for copper smelting, iron working, milling textiles and grain, and working tin.

These industries were drawn to Aberdulais for one major reason; the presence of readily available water power, provided by the falls, which tumble down a narrow gorge in the Dulais river. Over 160,000,000 litres of water can pass over the falls in a single day, providing a steady source of cheap water power.

The first industry to be established at Aberdulais was copper smelting, which sounds innocuous enough on the surface, but it was an industry with a secretive purpose. The date was 1584, and Elizabeth I was in desperate need of money to prepare for a conflict with Spain; a conflict that would shortly bring the Spanish Armada sailing towards England.

A German engineer named Ulrich Frosse designed a new method of smelting copper to turn into coinage. Elizabeth approved his plan but naturally wanted the affair kept secret. Frosse decided to set up his copper smelting works at Aberdulais, far from prying eyes. It was a wise choice, for aside from water power, the site had ready access to timber and coal. 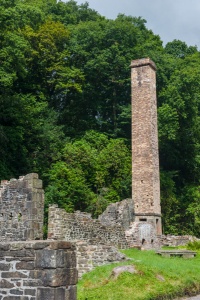 A smokestack from the
tin works

Over time the falls were used to power iron working machinery, textile and corn mills, but the industry most associated with Aberdulais is tin plating. Tin from Aberdulais was exported around the world, and Welsh tin output dwarfed the production of anyplace else in the world.

Unfortunately, the very success of the Welsh tin plating industry brought about its downfall, when the American government put heavy import duties on imported tinplate, and the Welsh industry collapsed.

Aberdulais became a popular destination for artists in the 18th and 19th centuries. Artistic luminaries including Turner, Ruskin, and Bonner came here to paint the corn mills and the waterfall.

In 1795 JMW Turner visited Aberdulais and sketched the corn mill and waterfall. He used his simple pencil sketch to create a watercolour painting called Aberdulais Mill, Glamorganshire, now owned by the National Library of Wales.

One of the major highlights at Aberdulais is the overshot water wheel, the largest electricity-generating water wheel in Europe. This huge wheel is not a historical relic; it actively generates green energy that is fed into the national power grid.

The wheel dominates the site, though it is dwarfed by a solitary brick smokestack, which teeters high above the ruins of buildings used to process the tin. One of these is The Tin House, where iron plates were hand-dipped in pots of molten tin. Set in the floor you can still see the ash pits which were used to catch the residue from hot vats of tin and grease. Once dipped, the plates were cooled in oil, then polished, graded, and boxed for shipping around the world. 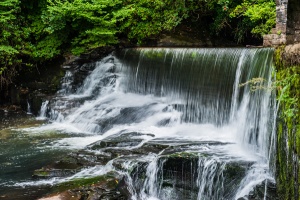 Quite a few of the tin industry buildings are preserved, including the former schoolhouse used to educate the children of mining families. Most of those children worked here when they weren't in school!

Another highlight is a single arch of a bridge across the Dulais that used to link the site to a tramway that connected to the Tennant Canal and, eventually, to Swansea and the sea.

Even if industrial activity had never taken place here, Aberdulais would still be worth visiting just to see the waterfall. There are several viewing platforms that allow you to see the falls from below, partway up, and from above. You can also see how water from the river is diverted into a trough that spills down onto the waterwheel, keeping the wheel turning and generating power.

I'm not terribly knowledgeable about mining or industrial heritage in general, but I found the Aberdulais site fascinating. It is fairly obvious that the National Trust is faced with a major task restoring the site and presenting it in a way that really brings to life its long and rich industrial history, but so far they've done a smashing job.

You really get a sense of what it must have been like for the people who worked at Aberdulais, especially in the late Victorian period when Aberdulais was at the heart of the Welsh tin plating industry.

One of the excellent features of the exhibition is that you learn about specific people who lived and worked here, from tin workers to their children. That alone helps bring the history of the site alive. Well worth a visit. 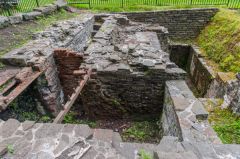 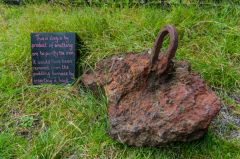 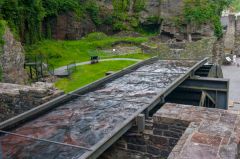 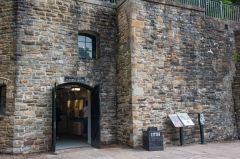 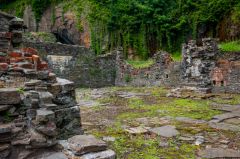 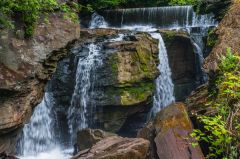 More self catering near Aberdulais

More bed and breakfasts near Aberdulais