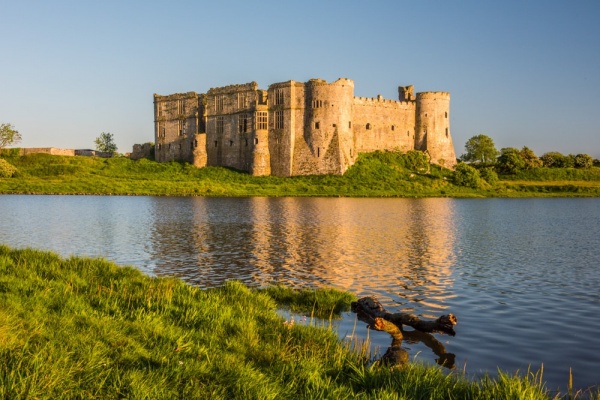 The ruins of Carew Castle stand in majestic splendour on the low banks of the River Carew, near Pembroke. Gerald of Windsor erected a Norman motte and bailey castle here about 1100, building on a still earlier Iron Age fort. It is perhaps odd that the fort was built here in a low-lying position beside the river, rather than on a natural defensive hilltop as was more common.

Gerald was a Norman lord, one of the influx of Normans into south Wales in the decades following the Battle of Hastings. Gerald gained the manor at Carew as a dowry gift when he married Nest, a legendary Welsh beauty. Marrying such a beautiful woman did have its drawbacks, however.

A local Welshman named Owain ap Cadwgan, son of a local prince, fell in love with Nest. In 1109 he scaled the walls of Gerald's timber fort and captured Nest. Gerald was not a man to let this insult pass, and he pursued Owain for 6 years.

Eventually he killed Owain in battle and recaptured Nest along with the two children she had born in her time with Owain. But Gerald died in 1116 and Nest remarried shortly after, to Stephen, the castellan of Cardigan. Nest's story has gone down in Welsh lore, and even after the passage of 900 years she is still regarded as 'the most beautiful woman in Wales', a sort of Welsh Helen of Troy.

By the 13th century it seems that a stone structure had replaced the earlier timber palisade. Certainly at least some of the castle was stone when King John briefly seized Carew on his way to Ireland in 1212. The Carew family retained ownership and rebuilt the castle to create the foundation of the fortress we can see today. 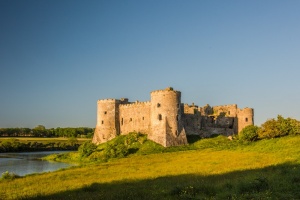 The man most responsible for the castle layout was Sir Nicholas de Carew. Three towers and the chapel survive from his 13th-century castle, but more obvious are the early Tudor additions of Sir Rhys ap Thomas, including the gatehouse. It was Thomas who held the last great Welsh tournament of arms here in 1507. When Rhys's grandson was executed for treason by Queen Mary in 1558 the queen granted Carew to Sir John Perrot, who may have been an illegitimate son of Henry VIII.

Perrot set about converting the medieval castle into a luxurious mansion, fit for a Tudor gentleman of substance. His major contribution were the extraordinary series of large mullioned windows which give the castle an almost lace-like feel in places.

Parrot did not stay around to enjoy the beautiful structure he had created, for he was arrested on a charge of treason and confined in the Tower of London, where he died in 1592, ostensibly of natural causes. His son did not manage to stay out of trouble either. In 1583 he had eloped with Lady Dorothy Devereux, daughter of the 1st Earl of Essex.

They were married in a secret ceremony, but for his trouble, Perrot was sent to the Tower of London and was only released when Dorothy's guardian, Lord Burghley, intervened on his behalf. Around 1686 the castle was abandoned, but it had long since ceased to have any military importance. It is now cared for by the Pembrokeshire Coast National Park, who also run the nearby tide mill (see below). 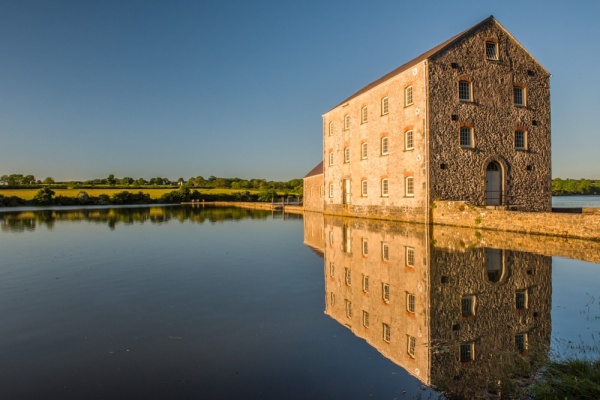 Near the castle entrance stands the superb 11th century Carew Cross, one of the finest early medieval Christian monuments in Wales, and the symbol chosen by CADW for its logo. A short stroll from the castle in the other direction leads you to Carew Mill, an 18th-century tidal mill.

We visited Carew Castle as a family and loved it. There were activities for our young daughter and plenty of dark and mysterious passages and towers for our son to explore. The sheer size and scale of the castle ranges are what really struck me; you can get a sense of just how impressive Sir John Perrot meant his residence to be.

The windows are simply stunning; the size of the window openings is huge; they must have made the interior filled with light. And of course, large windows meant glass, which was a sign of wealth and ostentation. People were meant to be awed by the owner's wealth and status. Please do take the time to examine the Celtic cross; it really is remarkable, and the Tidal Mill is well worth exploring.

There are two free parking areas, one just south of the castle, on the A4075, and one across the bridge and millpond a bit further north. The former is closer to the castle, but the latter gives you wonderful views across the millpond and a very enjoyable stroll to the tidal mill. I sometimes come here in the evening for a walk around the castle and mill pond. On a sunny summer evening it is a magical experience! 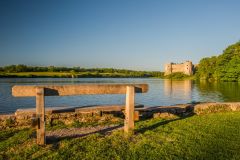 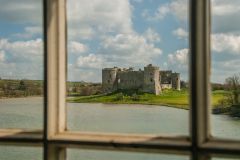 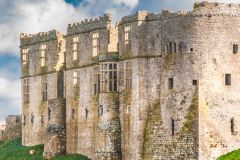 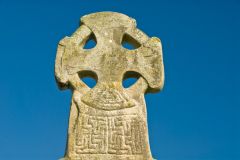 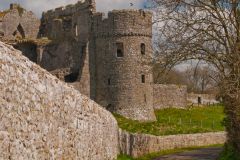 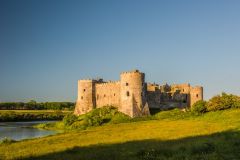 More self catering near Carew Castle >> 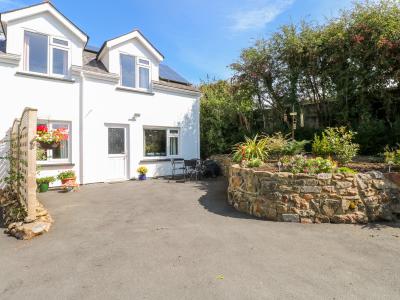 This semi-detached cottage rests near Carew and can sleep six people in three bedrooms.
Sleeps 6