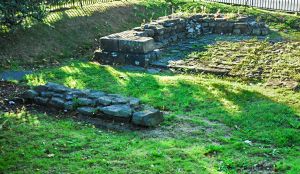 Neath Roman Fort
The remains of a 1st century Roman auxiliary fort known as Nidum stands on the west bank of the River Neath. Remains of 2 gateways can be seen, and the line of a rampart wall.
History
In 1949 workers clearing a building site to make way for a new housing estate exposed remnants of Roman foundations. Initial excavation showed a gateway for a 2nd century fort built of stone. Later excavations revealed the fort's outline and determined that it was an almost perfect square, aligned south-west to north-east, with central gateways in each side.

The fort was about 525 feet across and enclosed a total area of about 6.25 acres. It was initially built with four parallel ditches with earth and clay banks topped by timber walls, then later the rampart was re-faced with stone blocks, and stone towers were erected at each corner, and stone gateways inserted on each side. The combined width of the outer defences of ditches was 39 feet, which would have provided a difficult barrier for any attacker to cross. The strength of the defences shows how concerned the Romans were about the powerful Silures tribe, who ruled this area of south Wales.

The fort could hold up to 1000 men and horses, though we do not know what military unit was stationed at Neath. Over many years quite a large number of artefacts have been found, including roof tiles, floor tiles, Samian tableware, and pottery sherds from different time periods. Six 1st century coins were also found, from the reigns of different emperors.

We know very little about the fort's foundation, save that it was likely built during the first phase of Roman advance into Wales, most likely under the rule of Julius Frontinus (74-78 AD). Then around the turn of the 2nd century the original timber and earth defences were rebuilt in stone. It is possible that the fort was abandoned after the first Roman invasion attempt, and only later rebuilt and strengthened.

The fort appears to have been abandoned by 125 AD, then re-occupied from 140-170 AD before it was abandoned. It seems that a civilian settlement carried on after that time, and it may have been used yet again by the military from 275-320 AD.

What to See
The south-west gateway ruins stand behind railings on the Neath Abbey Road. The south east gateway stands at the corner of Roman Way next to a railway embankment. A section of ramparts can be seen on the playing fields of Dwr-y-Felin school.

The fort was in the news in recent years when an archaeological dig took place in the playing fields. Archaeologists uncovered parts of a 1st century building, with ramparts and a defensive tower, as well as 7 bread ovens. They also found an unusual palisade trench that may have been used to support a lifting mechanism.