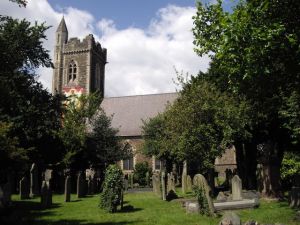 Aberavon, St Mary's Church
St Mary's church was built in the late 11th century, during the first wave of Norman incursions into south Wales. It is known as the burial place of early worker's rights leader Dic Penderyn.
History
The earliest church here was built n the late 11th or early 12th century, within the Norman planned town that became known as Aberavon. The earliest written record comes from 1254. In 1384 the church was appropriated by the Abbot Margam, and in 1768 the church was damaged by the heavy floods that swept away the nearby Aberavon Bridge.

Aberavon Castle stood immediately beside the church, though the castle site has been obliterated by modern buildings. In the chancel is a 12th century piscina, but this in not original to the church. It is thought to have been brought here from a nearby chapel in 1927.

In the north aisle is a medieval window, reset during Victorian restorations. In the south aisle is a 1704 altar table, and there is an ornate late Victorian reredos in alabaster and marble by the Kempson & Fowler company.

One of the most important historic people associated with Aberavon is Dic Penderyn (aka Richard Lewis), a leader in the 1831 Merthyr Rising of coal miners, protesting against low wages and poor working conditions. The Rising was the first occasion where the red flag was flown as a symbol of worker's rights.

Penderyn, a native of Aberavon, was falsely accused of murdering a soldier during the rising, and hanged in Cardiff market place. He was buried in St Mary's churchyard in Aberavon, and his memorial attracts visitors from all over Wales.

The church was completely rebuilt in 1858 in Gothic Revival style by the Prichard and Seddon company, and as a result much of the medieval structure and its furnishings were swept away. The exterior is a mix of Gothic style with Geometric window tracery, with Bath stone used for many of the window quoins and corners. The church is listed Grade II, primarily because of the late Victorian Gothic Revival architecture.