HERITAGE HIGHLIGHTS:   Once the deepest anthracite mine in the world 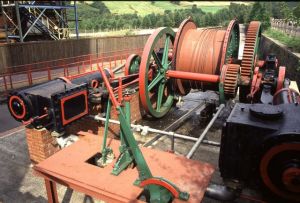 Cefn Coed Colliery Museum
Cefn Coed was once the deepest anthracite coal mine in the world. The mine is now a fascinating museum of industrial heritage, with the largest collection of steam boilers in Britain, and the largest working winding engine in Wales among the attractions.

The Cefn Coed mine had a stop-start beginning. In the 1920s the Llwynonn Colliery Company made 3 attempts to sink shafts through the hard sandstone that covered anthracite deposits in the Dulais Valley. In 1926 the Amalgamated Anthracite Combine bought out the LCC and with a large investment of money finally made the breakthrough. The first coal was extracted in 1930, using steam-powered engines. The veins of anthracite ran deep at Cefn Coed; the mines eventually reached a depth of 2500 feet underground, making the colliery the deepest anthracite mine in the world.

The depth of the mine shafts led to increased risk of accidents from methane gas exposure and collapsing shafts. A succession of accidents led to the Cefn Coed mine being labelled 'The Slaughterhouse'. The mine employed up to 9087 men at its height of production, but the high cost of maintenance required to keep the deep shafts open eventually led to closure in 1968.

The entire above-ground mine workings have been preserved as an industrial heritage museum. There is no access to the mine shafts, but one of the museum galleries recreates the underground life of the miners.

The main exhibition area shows how coal is formed, and tells the story of the colliery at Cefn Coed. See a variety of objects used in the mining process. Children can enjoy dressing up as a miner or his wife.

Perhaps the star exhibit at Cefn Coed is the Worsley Mesnes Horizontal Duplex Cylinder Steam Winding Engine, installed in 1927 to raise and lower coal, miners and mining equipment, in cages of the downcast shaft. The winding engine is the largest in Wales still in working order. It was originally powered by steam but later converted to electrical power. Visitors can sit in the winding man's cabin and pull the bell that sent shaft signals. The engine is not just a static display; it actually operates so visitors can see and hear its huge pistons moving.

Another historic steam winding engine is just outside the reception area. This engine was brought from the Morlais Colliery and was built in 1880. A special exhibit tells the tragic story of the roof falls that gave Cefn Coed the unfortunate nickname of 'The Slaughterhouse'.

Experience what life was like for the miners who worked here in the Underground Gallery. The gallery simulates the cramped, dark, damp conditions in the mines. Try your hand at pulling a wooden sled, and see how children worked underground in the Victorian period.

This room houses six 'Lancashire' steam boilers; the largest collection in the UK. The boilers originally stood in the open air, and were fed by a team of 3 stokers who worked 365 days a year, winter and summer, shovelling up to 10 tons of coal daily to keep the boilers operating.

Here's a treat! Visitors can climb on board the Neath Gas Tram, thought to be the only gas-operated passenger tram in the world. The tram has been restored to the way it looked when it was in operation in 1899. After the Neath tramway ceased operation the tram was used as a garden shed before being rediscovered and fully restored.

The colliery museum is also home to the Neath Historical Model Railway Club. A working model railway is dedicated to telling the history of steam railways in the Dulais Valley.

The museum has free admission and at the present is open every day except Wednesdays from April through September.