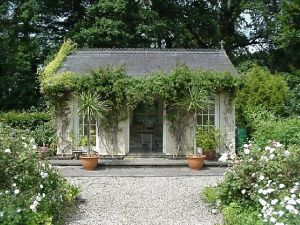 Summer house at Llanllyr Gardens
The historic house of Llanllyr boasts a four-acre garden begun in 1830, restored and redeveloped in the 1980's. Garden highlights include colourful borders, old roses, an Italianate water garden, and a walled kitchen garden.

Around 1180 Lord Rhys ap Gruffydd established a Cistercian nunnery here by the River Aeron as a daughter house of Strata Florida. The nunnery survived until the Dissolution of the Monasteries under Henry VIII and the monastic estate passed to the Lloyd family.

It was probably Morgan Lloyd (d. 1604), High Sheriff of Powys 4 times, who converted the nunnery into a dwelling. Sometime in the 18th century, the house gained a formal garden to the east, probably under the Lewes family, who purchased the property in 1720 and still own it today.

In 1826 the Lloyd's house was rebuilt in fashionable Regency style, using stone from the old house. At the same time as the new house was erected a formal garden was laid out. In 1the late 1980s the garden was cleared and replanted, with a small box garden near the house and a large shrub rose garden.

Other features include a fishpond, bog garden, and the Italianate water garden, laid out along the line of a medieval culvert.

Near the eastern border is a mount, or viewing platform, leading to a perimeter path and a winding trail lined by trees and shrubs. The garden is full of unusual trees and shrubs, with an emphasis on plants requiring little maintenance.

Llanllyr has two interesting historic features. Outside the rose garden is a carved Celtic stone, commemorating the gift of a plot of land to an Irish follower of St David around the year AD 600. Also look for the freestanding cob walls bordering the Victorian kitchen garden.

Llanllyr was named the finest large garden in Wales in a 2004 poll organised by the Clwb Garddio for the television channel S4C.

Llanllyr is open for NGS open garden days each year.

More self catering near Llanllyr Gardens >>