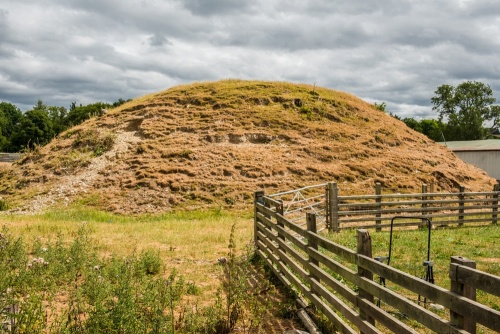 Trefilan Castle
Trefilan Castle is a large motte south of the parish church of Trefilan, begun by Maelgwyn, the son of Lord Rhys. It was finished by Maelgwyn's son, Maelgwyn Fychan, about 1233. It was probably used by the Welsh rulers of central Ceredigion as an administrative centre.

It is composed of a flat-topped oval mound defended by a moat. The site measures roughly 40m x 35m, oriented on a north-south axis, and the mound rises to roughly 5.4m high. The top of the mound is oval-shaped and measures 15m x 12m. On the summit are stone foundations dating to the 13th century.

The moat at the base of the mound is about 60m in diameter. Though dry now, it is thought to have been filled with water.

South-west of the moated mound in the neighbouring farm field are remains of the outer bailey. The bailey earthworks can be traced as a ditch about 0.5m wide, running in an arc to a gateway immediately west of the modern road. The entire area enclosed by the bailey measures about 123m x 87m, with the motte at the north-eastern part of the enclosure. 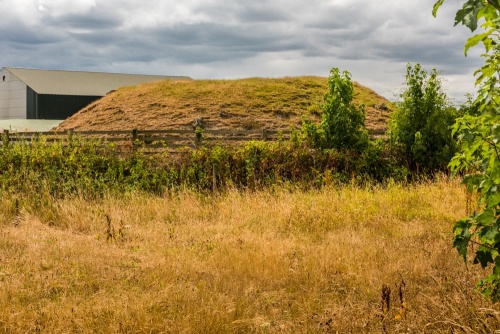 The castle motte from the north

Its last appearance in the pages of history comes in 1282, after Edward I put down the Welsh rebellion in that year. Edward's troops discovered 3000 cattle penned at Trefilan, presumably in an attempt by the Welsh to hide them from the English. The English burned the 'house' at Trefilan, which presumably meant the castle.

The castle is located at the junction of the B4337 and the B4342, six miles north of Lampeter, south of the B4342 and east of the B4337. The site is not signposted, and is very easy to miss if you aren't looking out for it. There is no dedicated parking area; we simply pulled off the road beside the parish church and walked back to the junction.

There you can easily see the castle motte, directly beside a dog kennel. As we approached the motte, the dogs noticed us, and gave us a very excited (and friendly) welcome. The motte is on private land, but you can get very close from the roadside, with views from the north and, even better, from the west.

More self catering near Trefilan Castle >>