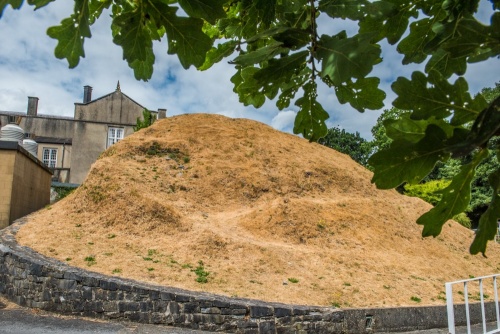 Lampeter Castle, sometimes known as Stephen's Castle, is an 11th-century earthen mound, or motte, built during the Norman conquest of southern Wales. The castle mound stands within the grounds of Lampeter University (more properly known as the Lampeter Campus of the University of Wales Trinity Saint David).

Curiously, though the castle motte has survived, the exact location of the surrounding bailey is a mystery. It seems possible that it extended west towards the parish church of St Peter.

The surviving motte dates to sometime in the late 11th century, possibly in the 1080s. It rises to 8.0m at its highest point, and is 30m in diameter around the base. There is a stone revetment supporting the eastern side of the motte. 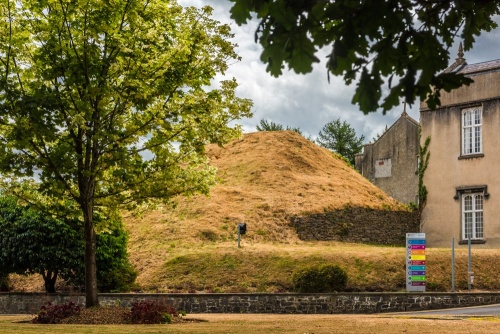 The castle from the north

Sketches made around 1819 by Ordnance Survey show several earthworks which were lost when the college buildings were erected in 1822. The castle motte was originally landscaped as part of the college grounds, with paths around and through the medieval remains forming part of the college's formal landscape gardens.

A small earthen enclosure stood to the north-west of the motte, and two rectangular enclosures with rounded edges existed to the south. The stone retaining wall to the east and south-east of the college buildings may run along the line of the pair of enclosures.

The reason for a castle in Lampeter seems clear; it stood on a level floodplain near a crossing of the Afon Teifi, on a major trading route to North Wales. 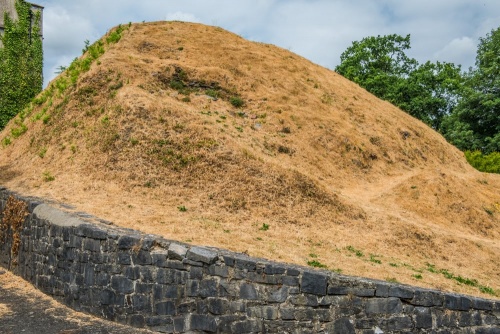 The castle mound from the south-east

Very little is known of the castle's history, but it may have been attacked and burned by the Welsh in the 1130s and never rebuilt. It is thought to have been captured by Cadell ap Gruffydd, prince of the Kingdom of Deheubarth, in 1146. Lampeter's location on a major trading route meant that it was a focus for several battles between the native Welsh and the Norman barons during the 12th century.

The castle motte stands next to the rear entrance to the Old Building, accessed off College Street. There is no signposting that we could see. We simply wandered into the college grounds and looked around until we found the motte by the north-east corner of the Old Building.

The castle is easily accessible any time the college grounds are open, and is only a few minutes walk from the High Street.

I highly recommend combining a visit to the castle with a stop to explore the university chapel, a delightful, richly decorated late Victorian chapel in the Old Building.

More self catering near Lampeter Castle

Self Catering near Lampeter