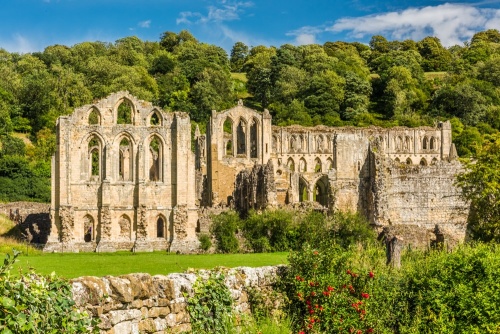 Rievaulx Abbey is a Cistercian monastery, founded in 1131 by Walter Espec in a secluded valley on the edge of the North York Moors. The name Rievaulx is a Norman concoction, a misuse of Rye Vallis, or Rye Valley. Or as we know it today, Ryedale.

The new abbey one of the first Cistercian houses to be established in England, and was meant to act as an administration centre for Cistercian missionary work in the north of England and into Scotland, a place from which monks would be sent out to establish daughter houses throughout the region.

The first structures at Rievaulx were temporary timber buildings, intended to serve only until proper permanent buildings could be erected in stone. The first stone structures were begun under the first abbot, William (1132-1145), sometime after 1135.

The plan for Rievaulx was to follow the same layout as that of the mother abbey of the order at Citeaux, in France. This consisted of a large church with a cloister range to the south.

Abbot William's church was taken down and rebuilt on a grand scale by the third abbot, Aelred (1147-1167). Aelred had come to Rievaulx from Scotland, where he had served as a steward in the household of King David. 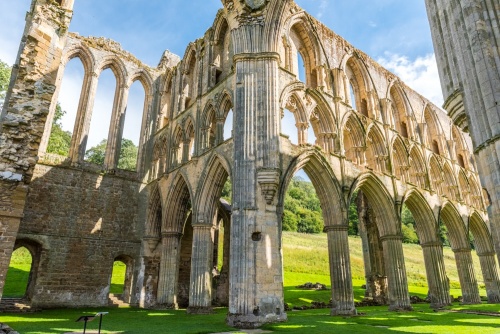 The east end of the church was later torn down and enlarged by Abbot Roger II (1223-1239). One unusual feature at Rievaulx is the orientation of the church.

Most churches in Britain, certainly established in the medieval period, are oriented loosely on an east/west line. At Rievaulx the layout of the site necessitated a different approach, and the abbey church is laid out on a north/south line.

Part of the struggle was the monk's own fault; an ambitious programme of rebuilding and extended the abbey buildings in the 13th century led to heavy debts.

But some things were beyond the abbey's control. Like most Cistercian monasteries (and those maintained by other orders such as the Premonstratensians) Rievaulx relied heavily on income from sheep farming.

In the 13th century, a series of epidemics ravaged the abbey's flocks, leaving them with far lower income than expected. They did engage in minor rebuilding during the 14th century, but by then the abbey had truly fallen upon hard times.

Parts of the abbey buildings were torn down in the 15th century. By the time the abbey was suppressed by Henry VIII in 1538, it supported 22 monks and 100 lay people. Compare that to the 1160s when, under Abbot Aelred, it had a population of 140 monks and more than 500 lay brothers. 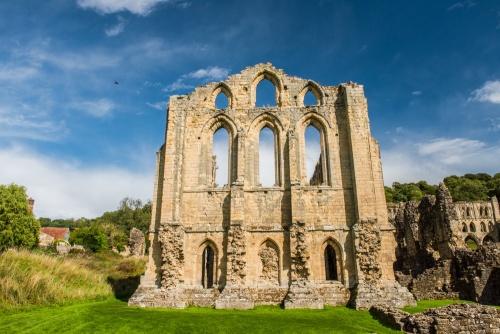 After the Dissolution of the Monasteries Rievaulx was sold to the Earl of Rutland. Though much of the stone was sold and carried off (or reserved for the king) Rutland was no fool, and he saw an even better prospect than simply looting the abbey remains for building material.

One of the buildings at Rievaulx was a water-powered iron forge. Rutland hired the former abbey ironmaster, and extended the ironworks, smelting and creating a variety of iron objects for sale.

Curiously, this small-scale iron industry was under the control of a clergyman, John Blackett, of Helmsley. Blackett used the undercroft of the abbey refectory to store charcoal used in heating the iron ore for smelting.

The ironworks prospered, and a blast furnace was added in 1577. A new forge was built, and renovated in 1600 and 1612, but by the 1640s the supply of local timber needed to create charcoal for smelting had been exhausted, and the abbey ironworks were closed.

The abbey ruins were then incorporated into the parkland of Duncombe Park. The picturesque abbey ruins became a popular destination for sightseers and attracted artists from across Britain. Its importance was recognised in 1919 when it became one of the first heritage sites in England to be taken on by the Ministry of Public Works. 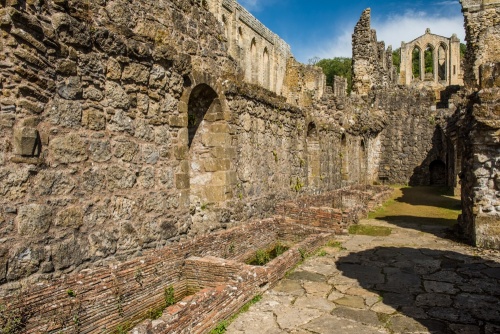 I've been to Rievaulx several times, and each time I see something new. Its such a magnificent location, set at the bottom of a treed slope, and surrounded by lush greenery. The arcades of the abbey church are, in my opinion, among the highlights of medieval architecture in England.

Rievaulx does not get as many visitors as Fountains (I'm not privy to official numbers, but it has always been less crowded when I've visited), but it is every bit as interesting and well work a visit.

Don't miss the abbey museum, where fabulous finds from the site are on display, including fragments of medieval glass from the abbey church. One highlight is a 14th-century carved frieze depicting two men approaching a four-sailed windmill. The abbey had its own windmill and all the abbey tenants were required to grind their grain there. There is also a carving of a Green Man and another that resembles a grotesque ape.


Do take the time to walk the short distance up Rievaulx Bank to the small parish church of St Mary's, Rievaulx. The church began in the 13th century as a 'slipper chapel', or gate chapel, built into the abbey gateway. It incorporates parts of the medieval chapel and gatehouse, and the inscription carved over the gateway. It was called a slipper chapel because pilgrims arriving to visit the shrine of St William would stop to remove their boots and put on slippers.

On the hill above Rievaulx Abbey is Rievaulx Terrace, a neo-classical pleasure garden created by Thomas Duncombe III, owner of Duncombe Park, in 1758. There are fabulous views from the Terrace of the entire abbey site, and I highly recommend a visit.

The Terrace is owned by the National Trust (whereas the abbey is cared for by English Heritage) and in my experience, their opening hours don't always coincide, but if you have the time and the Terrace is open, I do recommend a visit.

If you are truly ambitious and energetic, there is a waymarked walk from Rievaulx to Helmsley, where you can visit another English Heritage site at Helmsley Castle. 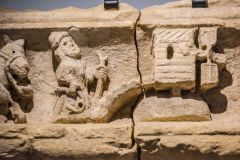 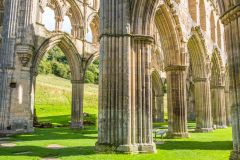 More self catering near Rievaulx Abbey