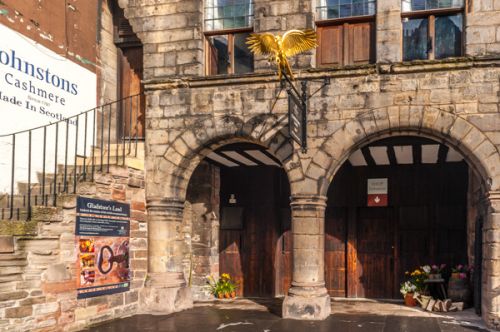 A relic of Edinburgh's past, Gladstone's Land is a six-storey tenement house on Lawnmarket, part of the Royal Mile, a short stroll from Edinburgh Castle to the east and St Giles Cathedral to the west. The earliest record of a building on what is now Gladstone's Land comes from 1501. It was one of numerous 'lands'; narrow strips of ground extending 100 metres back from the street.

A house was built around 1550 and contained a shop and merchant's dwelling on the bottom two floors, with the top 4 floors rented out in what was, in essence, a 16th-century high-rise catering to a variety of social classes.

Due to overcrowding in Edinburgh's Old Town the building had a very narrow frontage, so it could only be extended upwards and to the rear. 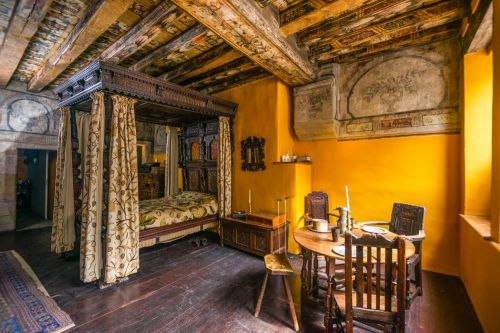 The mid-16th century house takes its name from Thomas Gledstanes, a wealthy merchant and burgess of Edinburgh, who bought the property in 1617. Gledstanes redeveloped the building to create a comfortable residence for himself and his family above and behind his shop premises fronting onto Lawnmarket. The Gledstanes may have initially lived in the third-floor apartment, where the figure of a hawk, or 'gled' appears on the painted ceiling on top of a stone, or 'stane'; a visual pun on the family name of Gledstanes.

Thomas Gledstane may have overextended his finances in rebuilding the tenement, so he was forced to let the top apartments to other residents as diverse as a minister, a knight, another merchant, and a guild officer. Gledstane's rebuilding almost doubled the usable space of the 'foreland', or front building, by extending 7 metres forward into Lawnmarket.

The extension used large stone arcades on the ground floor to support large chambers on the upper floors and enclose a pair of shops. At the base of the crow-stepped gables are the initials TG and BC for Thomas Gledstanes and his wife, Bessie Cunningham. 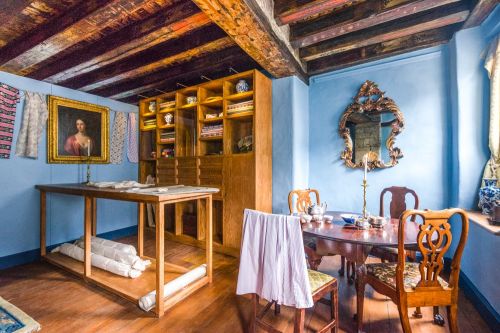 By the late 18th century, the wealthy merchants of Old Town left in favour of the elegant Georgian squares of New Town, and like many of its neighbours, Gladstone's Land was neglected and fell into disrepair. The once-prosperous Lawnmarket became run-down. In 1895 the 'backland' running away from Lawnmarket was torn down.

By 1934 Gladstone's Land was falling to pieces. The building was scheduled for demolition when the National Trust for Scotland stepped in. The Trust purchased the property and set about restoring the lower two floors. It was during this process that the exquisitely detailed painted ceilings were uncovered. 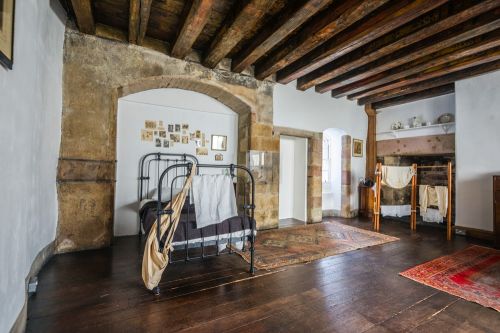 The ground floor has an arcade to offer protection for customers accessing the shop. To the left of the arcaded shop is a curving stair with iron railings, leading to a turnpike stair that gives access to the upper floors. Under the 'fore stair' was a livestock pen, usually used for keeping pigs, which was allowed to forage for food along the street.

The most distinctive feature of Gladstone's Land is a gilt-copper hawk suspended over the entrance. The gilded hawk is not original, but refers to the old Scots term 'gled', for a hawk.

If you study the front of the building you will notice that only the top half of the windows are glazed, while the bottom is covered with wood panels. This is an original feature, for Gledstanes considered glass too expensive to use in the entire window, so he only ordered enough panes to fit in the upper half of each window opening.

The museum layout covers three storeys, and reflects the lives of three of Gladstone's Land's merchant inhabitants representing three different centuries. Visitors can enjoy self-guided visits as well as a daily guided tour and specialty tours that include 'Tables Through Time: Food in Gladstone's Land' and 'Intimate Lives: The history of sex and desire in Edinburgh's Old Town' (16+).

Exhibitions focus on the trade aspect that Gladstone's Land embodies, centring on three traders throughout the building's history - Mary Wilson in the 20th century, William Dawson and Elizabeth Pillans in the 18th century and John Riddock and Margaret Noble in the 17th century.

Visits start on the 3rd floor, which recreates the boarding house run by Mary Wilson, who advertised for '2 to 3 respectable men' in The Scotsman in 1911. By this period, Edinburgh's Old Town had deteriorated and the decline is reflected in the room, however, Mary still ran a respectable business right until her death.

The 2nd floor recreates an 18th-century draper's shop run by Elizabeth Pillans and her husband William Dawson. They provided beautiful fabrics, haberdashery and fashion accessories to Edinburgh's high society. Visitors can try on Georgian fashions and admire themselves in gilded 18th-century mirrors. 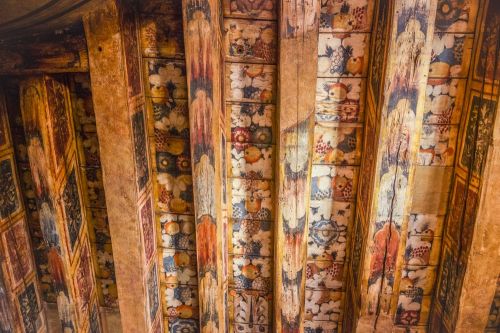 Then you descend to the 1st floor, which focuses on the 17th century when Thomas Gladstone himself still lived in the building and the rooms were owned by wealthy spice traders John Riddock and his wife Margaret Noble. Explore their living space, kitchen and stock room, where they lived with their 5 children and 2 servants, one of whom ran the downstairs tavern for the couple. This room features the best view of the 1620s Scottish Renaissance painted ceilings (more painted ceilings are visible throughout the property). In the stock room you can see spices and items with exotic scents.

Your visit ends on the ground floor, in the Cafe space where you can sit down with a cup of tea, coffee, cake or Equis double-cream ice cream. The Cafe continues the tradition of the last traders, as one of the final businesses in Gladstone's Land was Ramage's Dairy in the 1920s. 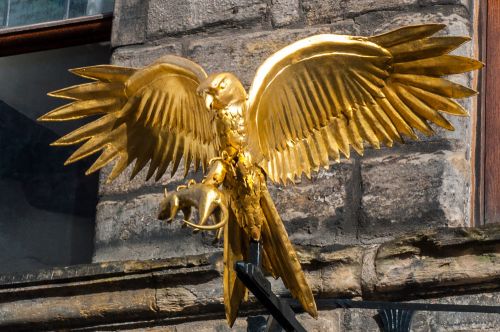 The gilded 'gled', or hawk, over the entrance

The most interesting room is The Painted Chamber, built by Gledstanes as part of his extension to the property in 1620. The curved ceiling is magnificently painted with colourful scenes depicting animals, flowers, and fruit. The walls are painted with friezes showing vases of flowers under rounded arches.

The effect is simply stunning, and really brings to life the world of a prosperous 17th-century merchant. The centrepiece of this room is a 17th-century four-poster bed decorated with intricate marquetry designs. The bed hangings are modern reproductions of 17th-century embroidery designs.

The doorway is made with curved timbers that may have come from a ship, and you can see oyster shells embedded in the building mortar.

By contrast with the Painted Chamber, the Green Room is decorated in the mid-Georgian style, with wooden panelling and sash windows. On the walls are portraits by famed Scottish artists Allan Ramsay, William Mossman, and Sir Godfrey Kneller. Over the fireplace is a painted panel by James Norie, an Edinburgh artist and close associate of architect William Adam.

Our family were fortunate enough to stay for a long weekend in the National Trust for Scotland apartment on the top floor. The apartment offers modern conveniences but you can still see exposed stonework and timber-framing.

Interior photos of Gladstone's Land are courtesy of the National Trust for Scotland. 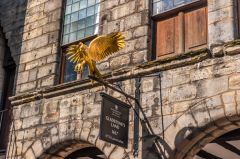 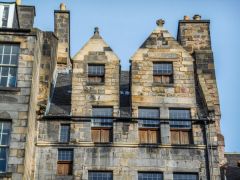 More self catering near Gladstone's Land